Former Baroka FC head coach Dylan Kerr following his controversial sacking has been reportedly appointed on Tuesday as the new head coach of fellow top-flight side Black Leopards as he rejoins the Limpopo-based side.

According to a report by KickOff, Kerr has replaced the outgoing Patrick Aussems after just three matches in charge.

Kerr previously managed Leopards during the 2018/2019 season guiding the team to a 13th placed finish before taking over at Baroka.

The 53-year-old head coach left Baroka in controversial circumstances after being shown the exit door after being found guilty of bringing the club into disrepute.

Kerr had accused the club of interference after an impressive win over Mamelodi Sundowns. He guided his team successfully in their fight against relegation by denying Kaizer Chiefs the league title with a draw on the last day of the season.

Despite this, Kerr was at first suspended for the beginning of the 2020/2021 campaign before receiving his marching orders.

Black Leopards, without a win from their opening three fixtures and who sit bottom in the league standings, next face Maritzburg United on Saturday.

We live in a world where facts and fiction get blurred
In times of uncertainty you need journalism you can trust. For only R75 per month, you have access to a world of in-depth analyses, investigative journalism, top opinions and a range of features. Journalism strengthens democracy. Invest in the future today.
Subscribe to News24
Related Links
Riyad Mahrez scores as Algeria qualify for Africa Cup of Nations
Mohamed Elneny positive for Covid-19 as Premier League reports rise in cases
Molefi Ntseki taking positives from Bafana Bafana's win over minnows Sao Tome
Next on Sport24
PSL confirms transfer window closes tonight, reopens February 2021 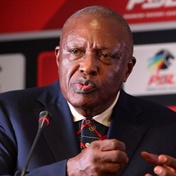