Cape Town - Highlands Park coach Owen Da Gama has explained his reasons for releasing as many as eight players from his squad at the end of the current season.

The Lions of the North had a more than decent campaign in the Absa Premiership as they finished seventh in the standings after being one of the promoted teams from the National First Division (NFD).

Da Gama has though been ruthless in shaping his squad for next season with strikers Moeketsi Sekola and Petrus Ngebo amongst the list of players to be shown the exit door.

Another player on his way out is midfielder Mahlatsi Makudulela who, like Sekola and Ngebo, saw limited opportunities with the Tembisa club.

Da Gama explained: "We sat down with management, we gave them a list and obviously there are financial implications involved with some players still under contract and some not under contract.

"I think it will rather be right that the players hear from the team first rather than hear from the media. We are releasing about eight players."

We live in a world where facts and fiction get blurred
In times of uncertainty you need journalism you can trust. For only R75 per month, you have access to a world of in-depth analyses, investigative journalism, top opinions and a range of features. Journalism strengthens democracy. Invest in the future today.
Subscribe to News24
Related Links
Retired Teko Modise set for CT City role
Herrera to earn staggering £300 000 a week at PSG
Hunt: We should've won this league
Next on Sport24
TTM decide against signing Gustavo Paez 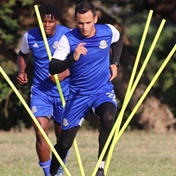