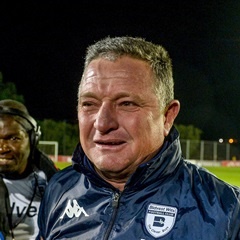 Cape Town - Dynamos striker Christian Epoupa seems to be moving closer to signing for Wits after he turned down a move to Polokwane City.

According to a NewsDay source, Harare giants Dynamos were happy with the offer they received from the Limpopo-based Polokwane City, only for Epoupa to reject the personal terms on offer.

"We agreed on the fees and everything else with Polokwane City. They forwarded their offer which was just below our asking price, but it was very reasonable," the source said.

"On our side, we had accepted the offer and were waiting for the player to agree personal terms so that we could sign the deal. Unfortunately, they couldn't reach an agreement and the deal was off.

"We can't divulge the figures that we agreed on because we are still negotiating with the other clubs. We want to get every penny that our player is worth."

The Zimbabwean club are reported to be looking for around R2.7 million for the Cameroon-born marksman's services.

And having confirmed last week that they had received offers from Bidvest Wits and Polokwane City, it appears that Epoupa could possibly be heading to the defending league champions if terms can be agreed upon.

However, there is also talk of him being on the radar of clubs in Germany and Belgium, despite the player having applied for a South African visa last week.

We live in a world where facts and fiction get blurred
In times of uncertainty you need journalism you can trust. For only R75 per month, you have access to a world of in-depth analyses, investigative journalism, top opinions and a range of features. Journalism strengthens democracy. Invest in the future today.
Subscribe to News24
Related Links
Segolela fails to get deal in NFD
Eymael wants Ea Lla Koto response
Vilakazi hopes the goals will flow soon
Next on Sport24
Swallows soar to top of PSL standings with win over hapless Kaizer Chiefs