Ertugral: Ajax CT only have ourselves to blame 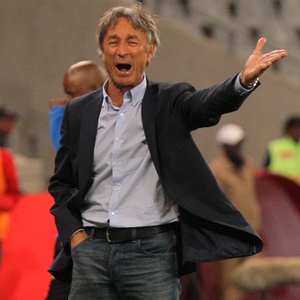 Cape Town - Muhsin Ertugral feels Ajax Cape Town should have been more clinical to avoid the Tuesday's defeat to AmaZulu in an Absa Premiership clash.

The Urban Warriors now face a mammoth task to get out of the relegation zone from their remaining five games.

Ertugral believes the pressure of playing for survival could have also taken a toll on his side based on the manner in which they lost the match on Tuesday.

Ertugral told Supersport: "I think the boys have given everything in my opinion.

"The questions will sometimes be in the situation that we are. Are we concentrating enough on aspects of the game?

"I mean, I think we should have gone into the lead with an easy chance early in the match.

"We seem to make wrong decisions in the final third and in the second half we needed to be careful with our building processes.

"After 1-1, I think we completely had the game under our control and also Morris had a fantastic shot that should have been a goal."

He said they were unlucky to concede and own goal towards the end of the match which made it difficult to bounce back again.

"In the end you get into a situation that will haunt you. I do not know what happened there, but it was a misjudgement from the goalkeeper and the wing back, Zwane.

"Then you get into the back foot trying to come back into the game, but it was a bit unfortunate today.

"Today was a key game for us, but we have messed it up. I think we have ourselves to blame."