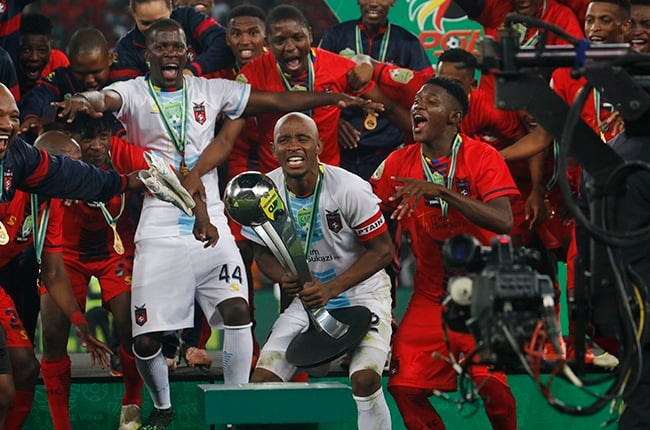 While the Nedbank Cup has had its fair share of shocks, finals have generally gone to script with very few upsets.

This applies to the various sponsorship iterations the tournament had gone through since 1971, when it was called the Life Challenge Cup.

Even lower division sides who have their day in the sun come unstuck at the business end, but every so often, they cause a shock that reverberates into eternity.

Zakhele Lepasa etched his name into the South African history books when his late penalty took Chiefs to the brink.

A late penalty was conceded, and Lepasa, who was on loan from Orlando Pirates, ensured Chiefs, who at the time was coached by Ernst Middendorp, ended the season trophyless.

In the season of tennis set losses (6-0 vs Mamelodi Sundowns and 6-1 vs SuperSport United), Orlando Pirates somehow found their way to a Nedbank Cup.

The previous season, they found a way to be competitive against SuperSport United in losing the final 3-2, but this clash in Durban was a no contest.

That Pirates scored a consolation goal through Oupa Manyisa was a scant reward. Kingston Nkhatha, Bradley Grobler (2) and Jeremy Brockie had already done the job on Pirates.

This was the first game at the FNB Stadium ahead of the 2010 World Cup, and Wits put on a show to hammer AmaZulu.

It was AmaZulu's fourth final appearance and their last one to date. Like the previous three, it ended in defeat.

Through Fabricio Rodrigues's brace and Sifiso Vilakazi's lone goal, Wits celebrated their first Nedbank Cup title since 1978, when the tournament was still known as the Mainstay Cup.

The ABSA Cup, which ran from 2003 to 2007, had some pretty unmemorable finals. Santos beating Ajax Cape Town in the 2003 final was routine, and so was Moroka Swallows getting past Manning Rangers the following year.

The same was applicable to SuperSport United beating Wits while Pirates and Chiefs played out a dull  2006 ABSA Cup final before Chiefs won on penalties.

It fell to Ajax and Sundowns to play out the most exciting final in 2007. The Brazilians had struggled with Ajax's rasping counterattacks, and Brett Evans's set-pieces in the league continued in the final.

Ajax deservedly beat Sundowns and secured their second piece of silverware after the 2000 Rothmans Cup success.

Sundowns were denied a league and cup double but would win the first edition of the Nedbank Cup the following year.

There was a time when Moroka Swallows were a force to be reckoned with in South African football, and this was it.

At this point, the tournament called the Bob Save Super Bowl was in the second year of its 13-year sponsorship existence that saw different teams lay claim to the title.

It was still the era of replays where if the first final was drawn, there would be a replay to settle the winner.

This was still in existence in the 1997/98 Rothmans Cup, where Sundowns and Chiefs replayed the final, which Chiefs won on penalties.

That said, the first final was drawn 1-1, but Swallows, under the leadership of the late Eddie Lewis, put five past to record their second success in the tournament.

It still remains the biggest winning margin in the 51-year existence of the tournament, and Swallows would win again in 1991 but needed to wait 13 years to repeat the success.

They won the tournament in its Nedbank Cup form in 2009, but after relegation in the 2014/15 season, fell out of the national footballing scene until their emergence in the 2020/21 season.