It was a tight affair in Port Elizabeth with both teams struggling to show quality in the final third of the pitch.

But the Chilli Boys clinched the three points after an excellent finish from Ruzaigh Gamildien in the second stanza.

The two clubs came out of the blocks with intent though forwards Harris Tchilimbou and Eleazar Rodgers struggled to find a combination in the opening exchanges.

Meanwhile, Chippa were hesitant in attack and appeared to be content to fire from distance with little affect on the goal in the final third.

The chances were few and far between as it ended 0-0 at the interval. After the break the hosts made a number of changes when Thabo Rakhale came on for the not effective Andile Mbenyane.

The action remained tight with little quality on display throughout. With that said, midfielder Gamildien proved to be the hero.

After latching onto a superb Repo Malepe assist he struck home just beyond the 70-minute mark.

At the end, Ea Lla Koto poured forward but had little end product as it ended 1-0 to the Chilli Boys. 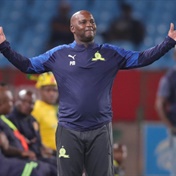