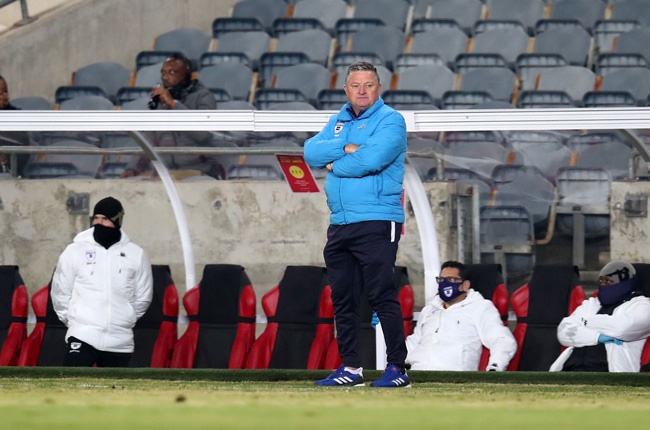 The Clever Boys were one of four teams to restart football in South Africa following a lengthy four month pause due to the coronavirus.

Next on the agenda for Hunt and Wits will be the mighty Amakhosi.

It will be Glamour Boys' first match in the Biologically Safe Environment (BSE) since the Premier Soccer League (PSL) introduced the bio-bubble to complete the 2019/20 season.

Hunt sees that as an opportunity for Wits to perhaps be one-up over their Soweto opponents when the two side meet on Wednesday night at 18:00.

"Well, the only good about Kaizer Chiefs is that we have three days and all the other games will be two days. So, you know we have a little bit of mileage in our legs now," Hunt told the media.

"How are we going to respond, obviously from the whole thing, losing the game as I said will be very difficult... the guys gave their all and there are no excuses, they were very unfortunate to lose the game. We should have won the game, but we gave the three goals away.

"Then you've got to give Lyle Lakay, who I signed from Old Mutual Academy many years ago. He's come good and I'm happy for him, happy for Pitso [Mosimane] and the team."

We live in a world where facts and fiction get blurred
In times of uncertainty you need journalism you can trust. For 14 free days, you can have access to a world of in-depth analyses, investigative journalism, top opinions and a range of features. Journalism strengthens democracy. Invest in the future today. Thereafter you will be billed R75 per month. You can cancel anytime and if you cancel within 14 days you won't be billed.
Subscribe to News24
Related Links
Pitso: We are currently preparing the team for the future
Tinkler, Claasen, Manyama collect PSL monthly awards
Desperate Chiefs, successful Sundowns eye PSL title as league resumes
Next on Sport
SuperSport United announce new shirt sponsor