With the spread of the coronavirus and subsequent suspension of leagues, clubs from all over the world are reconsidering their signing strategies as they feel the pinch of inactivity.

The days of big-money moves may be over for now, leaving teams to turn to academy players and loan signings.

Speaking to IOL, Hunt explained that Wits already struggle to compete on the transfer market with the bigger clubs in South Africa.

He said: "It is very difficult for a club like us to operate in the local market. We have to try and get one or two foreigners in, which doesn't always work out. You are not going to get foreign players.

"They will not be allowed to come in easily. We are going to struggle for permits.

"It will be a problem to get foreign players. We have to look within and look at our squad."

Hunt added that only Mamelodi Sundowns have the purchase power to make signings they want as he looks towards the youth in his squad for reinforcements.

"The age of our team is not too bad. It is not too old. It is not an ageing team," the former Hellenic and SuperSport coach explained. "It's got a little bit of mileage on it, a year or two. We will look at our young players. That's pretty much it.

"Clubs won't release their players easily. If that player is worth R2 million and you pay R8 million, then they will let him go. Who's going to pay R10 million for a player? There's only one team that can do that." 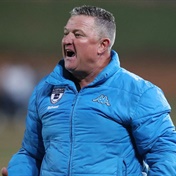