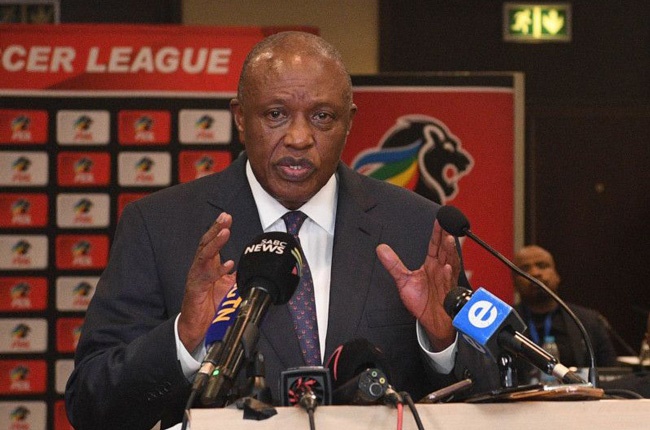 In a virtual press conference held in Johannesburg on Friday, Khoza also revealed when the transfer window will open.

Khoza, affectionately known as Iron Duke in the football fraternity, says the new campaign will kick off on Friday, 9 October.

Meanwhile, teams will also be allowed to search for fresh talent in the transfer window from Wednesday, 2 September until Saturday, 17 October.

"The registration window for the PSL, as agreed by the executive committee, will be 2nd of September to the 17th of October; that is the first window," Khoza said.

"The start of the season is presumed to be the 9th of October; the commencement of the new PSL season."

The ongoing 2019/20 campaign kicks off on Saturday in the Biologically Safe Enviroment (BSE) situated in Gauteng following a lengthy four month pause due to the coronavirus.

The Nedbank Cup will commence proceedings with the Absa Premiership and GladAfrica Championship getting a mid-week start on Tuesday, 11 August.

Khoza could not delve into whether or not the new campaign will start in the BSE as the country remains in lockdown Alert Level 3 with the various restrictions in place.

"The bubble is an expensive thing to have, that's why we said that the application of the BSE is going to assist us as to whether it will be a template for the future or not," said Khoza.

"For now we can't say anything because we don't know what the government is figuring out in terms of the (lockdown) levels or the sensitivity and severity of the pandemic.

"We will wait and see at that particular time [October] and come up with a strategy to mitigate whatever has been presented to us, for us to go forward and continue with the games," he said.

We live in a world where facts and fiction get blurred
In times of uncertainty you need journalism you can trust. For only R75 per month, you have access to a world of in-depth analyses, investigative journalism, top opinions and a range of features. Journalism strengthens democracy. Invest in the future today.
Subscribe to News24
Related Links
How PSL coaches feel about the bio-bubble: 'You just get paranoid!'
Wits register goalkeeping coach as backup for Nedbank Cup clash against Sundowns
Alan Clark: 'PSL coaches lack critical thinking'
Next on Sport24
PSL-Kaizer Chiefs case lingers on as matter referred to SAFA arbitration