Amakhosi were knocked out of the MTN8 at the first hurdle as Matthew Sim's early strike proved the difference on the night, firing the newly-formed Premiership outfit to the semi-finals of the competition.

This after Komphela's men were defeated 2-1 by last season's runners-up, Bidvest Wits, in their first game of the new campaign.

"On behalf of the club I just want to say to the fans to be patient with us, things are not going well so far but a big team like Kaizer Chiefs always bounces back and we'll surely make them proud in the next coming games," Khune said in his post-match interview.

"We still have a lot to play for, the season is still long, and we still have Telkom Knockout and Nedbank to fight for and we well do well and make them happy because that's what they deserve.

"For us to be knocked out in the first round of the MTN8, a big team like Kaizer Chiefs deserves better.

"We threw everything at Cape Town City, we couldn't get anything out of it, but we gave it our all and we are disappointed not to get the result."

Chiefs return to action following the international break, with Platinum Stars set to visit the FNB Stadium on September 14. 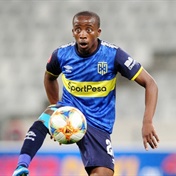