Komphela: Mathematically, we are still in the title race 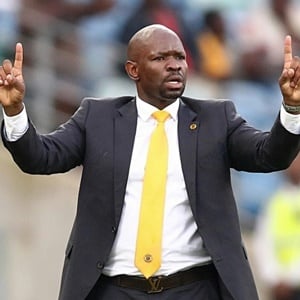 The Brazilians are 10 points clear (49) at the top of the table with Orlando Pirates (45) holding the runners up position.

The Glamour Boys (39) have enjoyed largely a successful 2018 having lost just twice in 14 matches in all competitions, with seven of those matches ending in victory.

Chiefs also have a Nedbank Cup semi-final to look forward to against Free State Stars on Saturday, April 21.

Despite a defeat to Chippa United in their previous league outing, Komphela takes the view there is plenty to play for.

"We just need to keep our focus, as we have a Nedbank Cup semi-final coming up," said Komphela.

"We also still have a lot to play for when it comes to the league.

"Mathematically, we are still in the title race, and we also have continental ambitions."

The 50-year-old's contract will expire at the end of June 2018 while Chiefs fans have been calling for the club to sack the coach since the start of the campaign.

Chiefs’ next encounter sees them come up against bottom-of-the-table Platinum Stars on Saturday night at the FNB Stadium in Johannesburg.

Dikwena boosted their own hopes of survival from the drop when they defeated Polokwane City 2-0 in last weekend's clash at the Royal Bafokeng Stadium in Phokeng.

We live in a world where facts and fiction get blurred
In times of uncertainty you need journalism you can trust. For only R75 per month, you have access to a world of in-depth analyses, investigative journalism, top opinions and a range of features. Journalism strengthens democracy. Invest in the future today.
Subscribe to News24
Related Links
Eymael: I respect Vilakazi's decision to leave
Fish: Pirates must keep winning
Fransman: We need to get momentum going into last games
Next on Sport24
'I know the quality of Benni' says Mngqithi as AmaZulu keep up with Sundowns