Cape Town - Chippa United coach Clinton Larsen threatened to leave the club if his best players are sold during the off-season.

The Chilli Boys managed to narrowly avoid relegation this season thanks to a dramatic 1-0 win over Kaizer Chiefs on the last day of the Premiership season.

Larsen is not keen to through another season of rebuilding and wants to keep his best players in order to build on the progress they made this term.

"For me to stay certain things have to change," Larsen told KickOff website.

"If we want to be competitive we can't keep blaming coaches when you keep selling your best players. Then you have to be prepared for relegation fights in every season.

"So it's up to the club to make sure now we hold onto our best players and I believe we will do that."

Larsen was speaking out after rumours surfaced earlier in the week that several Premiership clubs are interested in prizing defender Zitha Macheke away from the club.

However, it remains to be seen whether Chippa will even decide to renew the 48-year-olds contract after a season that can be kindly be described as below par.

We live in a world where facts and fiction get blurred
In times of uncertainty you need journalism you can trust. For only R75 per month, you have access to a world of in-depth analyses, investigative journalism, top opinions and a range of features. Journalism strengthens democracy. Invest in the future today.
Subscribe to News24
Related Links
Komphela reflects on Nomvethe retiring and 2018/19
Lorch walks away R450 000 richer after PSL awards
Lorch the big winner at glittering PSL awards
Next on Sport24
Themba Zwane aims to keep the goals coming 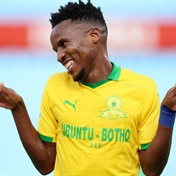