Cape Town - There was no separating Black Leopards and Highlands Park on Saturday as they played to a 1-1 draw in their Absa Premiership clash at Thohoyandou Stadium.

The visitors opened their account a few minutes before the half-time break thanks to Sphiwe Mahlangu, but the Lions of North rallied in the second stanza, drawing level through Lesedi Kapinga's powerful shot on 51 minutes.

Leopards started the match on the front foot and went close to grabbing the lead in the 11th minute as Kapinga saw his shot from the edge of the box brilliantly tipped wide by goalkeeper Thela Ngobeni.

Highlands Park were content to sit back and soak up the pressure as the half wore on, with a view to hitting their opponents on the break.

And their approach paid off handsomely as the went on to claim the lead in the 42nd minute, Mahlangu heading home from close range after the defence failed to clear Ryan Rae's long throw-in.

It didn't take too long for Leopards to post response after the half-time interval, with Ngobeni unable to keep out Kapinga's stinging shot despite getting a hand to the ball.

Leopards kept pressing forward as they went in search of a winner and very nearly got the breakthrough they were looking for in the 75th minute when Themba Ndlovu headed agonisingly wide at the near post.

The sustained pressure almost took its toll on Ngobeni in the 80th minute, but he recovered brilliantly to deny Ndlovu what looked to be a certain goal after kicking the ball into the back of a team-mate.

But that was the last chance of note as the Lions of the North held firm in the last few minutes to claim a valuable point away from home. 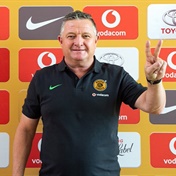