Bloemfontein Celtic secured a shock 1-0 victory over Mamelodi Sundowns in their MTN8 quarter final clash at the Lucas Moripe Stadium on Sunday.

Victor Letsoalo netted the only goal of the game on 69 minutes to eliminate the 2019/20 treble winners and secure Celtic's place in the semi-finals of the competition.

It was the first competitive match for Sundowns' coaching duo of Manqoba Mngqithi and Rulani Mokwena, alongside Steve Komphela.

Nyiko Mobbie, Haashim Domingo and Peter Shalulile all made their debuts for Downs, who were largely dominant in the opening exchanges.

Ricardo Nascimento came close to an opener after just five minutes, but Celtic goalkeeper Jackson Mabokgwane made a strong stop before Motebang Sera cleared the rebound off the line.

A long-range effort from Shalulile was well wide a minute later as Sundowns looked to make the most of some good early pressure.

Motebang should have done better when the ball dropped to him inside the Sundowns box on 20 minutes, but his control let him down and the chance was lost.

Gaston Sirino was next with an opportunity for the Brazilians, on the half-hour mark, as he flicked a Lyle Lakay cross goalward, but Mabokgwane was on hand to make the stop before Thato Lingwati completed the clearance.

Shalulile had the ball in the back of the net as he headed home a 44th minute free kick but the effort was correctly ruled out for offsides.

Sundowns remained dominant after the break but failed to convert a number of half chances and were ultimately punished when Letsoalo headed home at the back post from a pinpoint set piece, to leave Downs stopper Denis Onyango with no chance.

Soon after, Hlompho Kekana smashed a venomous shot onto the Celtic crossbar, and while the shot beat Mabokgwane, the ball bounced on the goal line and away.

With the match winding down, Tumelo Mangweni went on a great run but could only shoot into side netting, while Kermit Erasmus was off target with a shot on the turn.

Ultimately it was a loss and elimination for the Premiership champions, while Celtic will face SuperSport United in their semi-final tie.

We live in a world where facts and fiction get blurred
In times of uncertainty you need journalism you can trust. For only R75 per month, you have access to a world of in-depth analyses, investigative journalism, top opinions and a range of features. Journalism strengthens democracy. Invest in the future today.
Subscribe to News24
Related Links
Doctor Khumalo on Gavin Hunt joining Kaizer Chiefs: 'Pedigree meets rich history'
DEEP DIVE | The full dossier on Sundowns coaches Mngqithi, Mokwena and Komphela
Gavin Hunt begins journey at Kaizer Chiefs, a dying giant seeking revival
Next on Sport24
'I have a very good feeling': Pirates coach Josef Zinnbauer on Soweto derby win 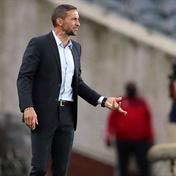