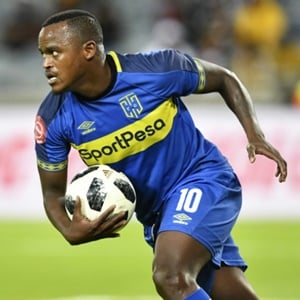 Cape Town - Maritzburg United made it five Absa Premiership clean sheets in a row although they had to be content with a point after a goalless draw with Cape Town City at the Harry Gwala Stadium on Friday.

Both sides struggled to create too many openings, with goalkeepers Richard Ofori and Peter Leeuwenburgh largely spectators.

The dense home crowd did their best to lift their team without any success as the Team of Choice picked up a fourth draw in five games, all with clean sheets.

In fact it was the fifth straight game that their impressive defence did not concede and has given them a platform to now kick on.

For City, the draw also represented progress following a home loss to Wits in midweek.

As for the action, there was not too much. In the 14th minute, Ayanda Patosi tested Ofori when he collected the ball from a throw, turned into space and forced the goalkeeper to parry the 25-yard effort away for a corner.

Gift Links then tested Ofori again, before Yannick Zakri fired a low shot from outside the box that Leeuwenburgh could only palm away, with the rebound sent over by Siphisihle Ndlovu.

And before the half-hour, Patosi's corner from the right picked out Thabo Nodada, whose effort also sailed wildly wide.

Keletso Makgalwa was introduced at the break and the on-loan Mamelodi Sundowns man added a spark to proceedings.

Before the hour he curled a 20-yard free-kick just over, before his inviting corner was headed over the top by Siyanda Xulu.

Not long after Surprise Ralani and Gift Links came close for the visitors, the former shooting straight at Ofori, before the latter saw his attempt blocked by a defender.