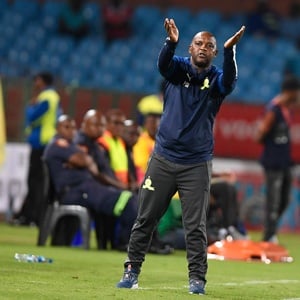 Mamelodi Sundowns head coach Pitso Mosimane reveals he is waiting to hear from the club with regards to his contract renewal.

As things stand, the multiple Premiership title winner's contract expires at the end of the current campaign and no details about a new deal have so far been released.

However, Mosimane reveals there have been talks between himself and the club and that, as far as he is concerned, matters have been settled and agreed to. So he is just waiting for an official offer but one has not materialised yet.

"It's a tough one that one. Remember earlier I said that 80 percent of the contract has been agreed? So I have complied to 100 percent – to what Sundowns wanted," he said, according to Soccer Laduma.

"I am waiting for Sundowns now. You can ask Sundowns. I have long complied – the ball is in Sundowns' court not in my court.

"There's no more 'what's left'. I don't know, you must ask Sundowns. I am here, I want to be here and I hope I will be here.

"It's not me, don't put it on me. I am sorted now, I have complied with everything, don't ask me. It's on the other side, not my side. I am a professional coach, I behave as if I am here."

Mosimane has been instrumental in molding Downs into one of the most formidible sides on the African continent but they have been chasing Kaiser Chiefs for most of this season in the Premiership.

They are one of very few teams who still have a shot at challenging Chiefs for the title this season and it would come as a major surprise to football fans if he was not offered a contract extension.