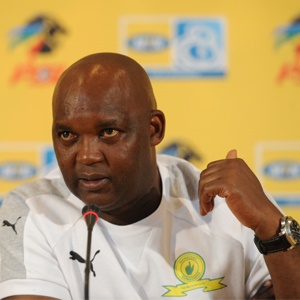 Pitso Mosimane (Gallo Images)
Cape Town - Pitso Mosimane has warned Mamelodi Sundowns they have not yet won the CAF Champions League, despite taking a healthy 3-0 lead to Egypt against Zamalek.

The Premiership champions put the five-time Champions League winners to the sword in the first leg of the final with goals from Anthony Laffor, Tebogo Langerman and an Islam Gamal own-goal.

Despite many feeling that the Masandawana already have the trophy in the bag ahead of their trip to Cairo, Mosimane warned that the White Knights have already scored four goals at their home ground therefore the result isn't a foregone conclusion.

"No doubt there will be pressure and hostility from the fans but we are ready for anything," he told the official CAF website.

"I hear a lot of people saying it's already in the bag for Sundowns but this is football and we must never forget that they have scored four at home in this very competition.

"It would be very foolish to consider ourselves champions without kicking a ball. We got the advantage that we needed at home but the last hurdle is on Sunday.

"With the backing of the crowd, we know that they will be coming at us from the onset but this will give us the perfect opportunity to catch them with our speed on the break."

Sundowns will look to complete another double over Zamalek, having already defeated the Egyptian giants three times in the competition thus far, following 2-1 and 1-0 wins in the group stages.

The two teams will square off at the Borg El Arab Stadium in Alexandria on Sunday.