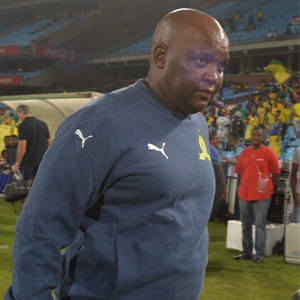 Masandawana were held to a 2-2 draw at home by Maritzburg United, while Wits claimed a 2-0 win over Polokwane City to secure the silverware.

The results put Wits four points clear of last season's champions Sundowns, with only one game left to play.

“It was not meant for us. We have to accept it,” Mosimane said in his post-match interview, according to Goal.com website.

“You’ve got to congratulate Wits. They’ve done very well, they deserve the trophy. You know, we’ve got seven titles. So, it’s about football, it’s like that. That’s how Barca (Barcelona) or Real Madrid will feel in the last match as well - one of them will be feeling like that after the last match, but it’s OK.

“The second goal was very important for us; to keep us alive for second position for a (CAF) Champions League. So, it’s OK, you’ve got to accept it.”

He added: “What makes me happy is (the fans), they were singing all the way. Unbelievable. They understand you can’t win everything. I’m very proud of this team that even at this point in time we are still fighting for second position."