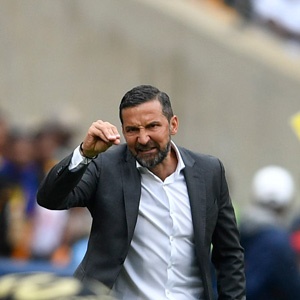 Cape Town - Orlando Pirates coach Josef Zinnbauer does not feel his tactics were to blame for the Soweto derby defeat to Kaizer Chiefs.

Chiefs prevailed 1-0 at FNB Stadium on Saturday to open up a seven-point lead at the top of the Absa Premiership standings and virtually put an end to Pirates' title hopes.

And Zinnbauer says it was unfortunate that his side conceded so early as it meant that Chiefs could park the bus which made it difficult for his side to find an opening.

"It's very easy (to manage the game) when you have a goal. When we conceded and then we had a problem because they have a very good defence," Zinnbauer told Goal.

"Everybody is told it's so easy. We can play football against a different team. We did our best and did have chances but don't forget we played against Kaizer Chiefs; they have the quality.

"I think you are a little bit more offensive to get the goals (then one can't criticise the tactics) but the play was good. I don't think this was a bad game from Kaizer Chiefs - it was a good game, a good derby."

The German mentor feels that if his side had taken their chances, they would have come away with the three points on the day.

"When you are losing a game, you take a few risks and we did so, but we got nothing out of it."