Pitso lashes out at 'unethical' Eymael over Chiefs job 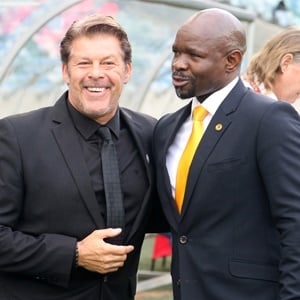 Mosimane said the Belgian lacked ethics when speaking on the rumours linking him to the Amakhosi post while Steve Komphela still occupied the position.

The Masandawana coach added that Eymael was desperately doing anything to position himself for the managerial post at Naturena.

"Somewhere‚ somehow‚ the ethics are not there, Mosimane told journalists. "It sounds like he’ll do anything to coach at Chiefs."

"You can't say this team and that team (wants you).

"There are only two teams left that he is still to name (who want him) and that’s Barcelona and Real Madrid‚" Mosimane said sarcastically.

The outspoken Eymael previously confirmed to reporters that the cordial relationship between the two had broken down due to the rumours that he was set to replace Komphela.

"Before the rumours surfaced, we were talking [to each other] as coaches, but now we are no longer talking to each other.

"These rumours have created rivalry between [the] Chiefs coach and myself. I didn't do anything wrong but perhaps he thinks I did something wrong," Eymael said at a press briefing.

"I cannot avoid people to gossip and I also cannot tell the journalists what to write. Until now, I haven't been contacted by either Chiefs or SuperSport United, but in the last few months I was called by maybe four PSL clubs and I said 'no'." 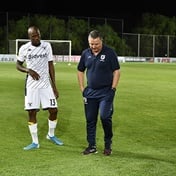