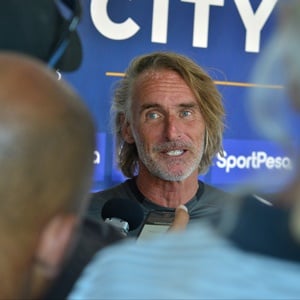 Cape Town - Cape Town City's recent return to form was halted by a determined Polokwane City, who ran out 3-2 winners in their Absa Premiership encounter at the Old Peter Mokaba Stadium on Sunday afternoon.

The Citizens came into the match on a three-match unbeaten run, having seemed to have finally started turning their season around under new manager Jan Olde Riekerink.

Rise and Shine began the fixture rooted to the bottom of the Premiership standings and desparate for three points. Their desparation was evident as they began the game very well and quickly had the visitors under pressure.

Jabu Maluleke had the first chance of the game in the seven minute but pulled it inches wide of the post. The hosts were back a minute later but Puleng Tlolane was denied by the post.

However, it did not take long for them to open the scoring and Walter Musona put into a deserved 1-0 lead in the 10th minute with a well-timed finish.

It took just nine minutes for City respond, though, as Edmilson Dove rose above the Polokwane defence to power a header past Mwenya Chibwe in the 19th minute.

Thabo Nodada nearly put the away side ahead three minutes later but his powerful strike was denied by an expert finger-tip save by Chibwe.

The frenetic action continued and Polokwane City restored their lead in the 28th minute. Eden Nene got on the end of a Salulani Phiri cross and turned it in to make it 2-1.

The sides continued to trade chances for the remainder of the first half, but City were much the stronger of the two teams after the break.

They thought they should have had a penalty in the 49th minute but their protests were waved away by the referee. They maintained a period of sustained pressure for the better part of 25 minutes before they were finally back on level terms around the hour mark.

It was again through a good leap as Taariq Fielies got above the defence this time to head his side level.

Polokwane City would not be denied, though, and Puleng Tlolane put them ahead for the third and final time in the 73rd minute.

The Citizens tried to fight back but any chances they had of getting a third equaliser disappeared in the 88th minute when Ioannis Potouridis was sent off for picking up his second yellow card.