Cape Town - SuperSport United goalkeeper Ronwen Williams has come out and said that Orlando Pirates "never contacted me or my agency" during the last two years.

The Bafana Bafana shot stopper has been heavily linked with a move to the Buccaneers since 2017 but nothing has ever come of the transfer speculation.

Williams, who has been Matsatsantsa's number one keeper since making his debut during the 2010/11 season, revealed he has never been approached by the Soweto giants.

The 28-yeaold said in an interview on Lesedi FM: "Pirates never contacted me or my agency.

"I only read those reports in the media, but I never spoke to anyone from Pirates.

"I also don't think they spoke to my team (SuperSport United) because they would have told me."

Williams has since gone on to sign a new five-year contract with SuperSport United and it would take a big offer to lure him away from the club that he has been at since the age of 12.

Related Links
Pitso: Al Ahly will be less complacent this time around
Mapeza wanted to see more from Chippa
WATCH | Pirates coach shows that he has rhythm to dance!
Share
Next on Sport24
Sundowns reach Nedbank Cup final after dramatic late winner 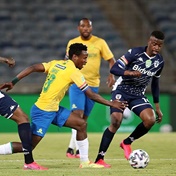