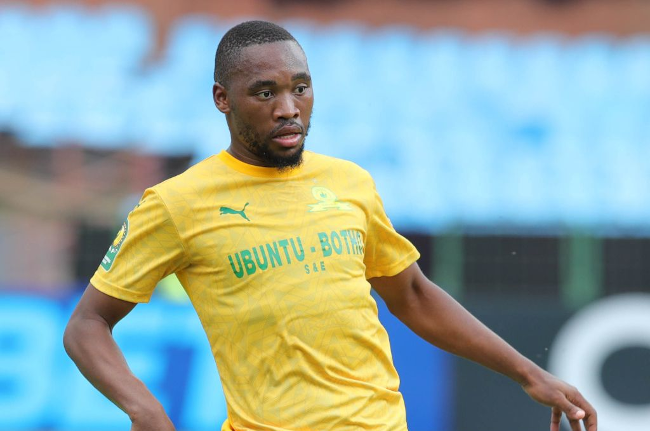 Mamelodi Sundowns got back to winning ways in the DStv Premiership and wrote themselves into the record books with a 3-1 come-from-behind victory over Tshakhuma Tsha Madzivhandila (TTM) at Peter Mokaba Stadium in Polokwane on Tuesday.

Their latest triumph means they equal the longest-ever unbeaten run of 19 games since the start of a PSL season, set by Stuart Baxter's Kaizer Chiefs side in the 2014/15 season.

Sundowns were held to a 0-0 draw by Black Leopards in their last league match but the defending champions were not to be denied in Limpopo this time around as goals from Rivaldo Coetzee, Siphelele Mkhulise and Sibusiso Vilakazi saw them roar back after going behind to Thembisani Nevhulamba's strike.

TTM coach-to-be Dylan Kerr was watching on from the stands as he is still awaiting a work permit.

The first attempt on goal came Sundowns' way. Shalulile passed to Thapelo Morena on the right-hand side of the box and he teed up the more central Lebohang Maboe, who side-footed one narrowly over the bar.

Soon after, TTM took the lead against the run of play from a set-piece. Mosa Lebusa fouled Ndabayithethwa Ndlondlo and Thabo Mnyamane, who had been TTM's best player of the match thus far, delivered the free-kick from the left-hand side to the near post and an unmarked Nevhulamba planted his header into the top left-hand corner.

In the 20th minute, Gaston Sirino played one across goal just inside the big box with Maboe letting it run through his legs for Zwane curl to control and curl an effort inches wide of the right-hand post.

Brazilians shot-stopper Denis Onyango then produced a fantastic save to prevent if from becoming 2-0. The ball fell kindly to Mnyamane from a cross and his close-range effort on the turn was brilliantly saved by the legs of the Uganda international, who had done well to narrow the angle.

A corner from Lakay then caused havoc in the TTM defence and found its way to Rushine de Reuck at the back post, who came close to stabbing home his first goal for the club but Vhadau Vha Damani shot-stopper Washington Arubi extended himself to make a terrific save and tip it around the post with his fingertips.

The visitors equalised with the very last action of the first-half. Sirino delivered the corner from the left-hand side and Coetzee got goalside of the TTM defence and headed home from close-range for his first goal in a Brazilians shirt.

Ten minutes into the second-half, Maboe played a sumptuous through-ball for Sirino, who chipped the onrushing Arubi but the ball was brilliantly cleared off the line in the nick of time.

Soon after, Morena had a chance to grab his first league goal of the season. Mkhulise played a clever through ball for Morena down the left hand-side of the box, who dragged the shot on his unfavoured left-foot wide of the far post.

Arubi was well positioned on the hour mark to save from Lakay's powerful long-range effort with the Zimbabwean shot-stopper the difference between the two sides.

However, moments later, Sundowns won a penalty when Lehlohonolo Nonyane felled Zwane in the box. Sirino stepped up looking for his first goal of the season but put the ball into the stand.

Lakay and Morena were switching flanks in the second half and it paid dividends in the 69th minute. The ball was shifted out left to Lakay, who cut inside on his favoured left foot and was allowed to curl one towards the back post, which Mkhulise headed powerfully into the back of the net after making a late run into the box.

Soon after, Zwane brought down Mnyamane a little over 20 metres out. The former SuperSport United attacker dusted himself off and bent one superbly over the wall that hit the outside of the right-hand upright before going behind.

However, the result was all but put to bed in the 81st minute when Shalulile's lofted cross was side-footed on the volley from close range into the back of the net at the back of the post by substitute Sibusiso Vilakazi to extend the Brazilians' lead at the top of the DStv Premiership standings to six points with two games in hand.

We live in a world where facts and fiction get blurred
In times of uncertainty you need journalism you can trust. For only R75 per month, you have access to a world of in-depth analyses, investigative journalism, top opinions and a range of features. Journalism strengthens democracy. Invest in the future today.
Subscribe to News24
Next on Sport24
Kaizer Chiefs through to CAF Champions League KO stage after sensational comeback