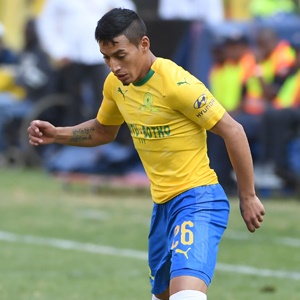 Matsatsantsa secured their place in the MTN8 final following Wednesday's 2-0 win after goals from Teboho Mokoena and Jamie Webber on the night.

Sirino was involved in an off-the-ball incident with Furman and Daniels, which has been the main talking point of the game.

The Uruguayan was booked for his involvement, but Tembo played down the incident, saying they are normal for feisty games like the Tshwane Derby.

"Those are tough decisions that sometimes referees have got to make. You have to make those tough calls but I'm not sure what really happened, from what I heard, someone was slapped," Tembo told SuperSport after the game."We need to stamp that out a little bit out of our game. But at the same time, it's emotions, it's a derby, it's normal."Speaking of the game, Tembo was impressed by how his team didn't rely on prolific forwards Bradley Grobler and Thamsanqa Gabuza this time around."We knew it was not going to be an easy game. We had to be a little bit patient and compact a little bit defensively and catch them on transition. They rested about nine players, we knew they had fresh legs. We made only one change from Saturday," Tembo continued.

"I'm very proud of the boys because they worked very hard. It's not easy playing a team like Sundowns and you come out with a result like this.

"This season we've got goals coming in from different angles. Today we got two young midfielders scoring the goals and that's what we have been preaching to have a lot of our attacking players contributing in terms of scoring goals."

We live in a world where facts and fiction get blurred
In times of uncertainty you need journalism you can trust. For only R75 per month, you have access to a world of in-depth analyses, investigative journalism, top opinions and a range of features. Journalism strengthens democracy. Invest in the future today.
Subscribe to News24
Related Links
Mosimane responds to Sirino incident
5 things learned from the Champions League
Percy Tau an unused sub as Club Brugge hold Galatasaray
Next on Sport24
Galaxy sack Owen Da Gama following 'poor results', Bartlett takes over on interim basis