Cape Town - Thamsanqa Gabuza has issued a heartfelt apology to his team-mates and Orlando Pirates fans for his on-field meltdown in an Absa Premiership clash against Black Leopards at the New Peter Mokaba Stadium on Tuesday.

In a video posted on the Buccaneers' official Twitter account the Bafana Bafana international apologised profusely for his actions that led to him being sent off in bizarre fashion.

"I just want to say that I am really, really sorry to all the supporters and my team for my actions. It was due to frustration that led to my reaction to throw my jersey at the supporters during the game," he said.

In one of the most bizarre scenes to happen on a soccer pitch, the 31-year-old threw his jersey at his own booing fans - who were calling for him to be substituted - before storming off the pitch.

Gabuza's actions forced head coach Milutin Sredojevic to navigate the rest of the game with only 10 men on the pitch which they managed to do - resulting in a 2-1 win.

When reached earlier for comment the Soweto giants said at the time they couldn't comment as they were still travelling back from Polokwane.

It is unknown whether the club will take any disciplinary action against the player. 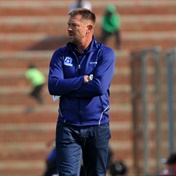