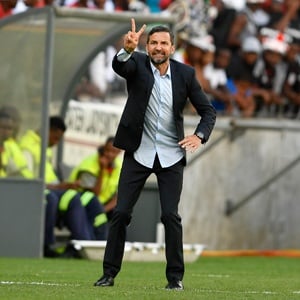 Orlando Pirates coach Josef Zinnbauer says he would be satisfied with a place in the Absa Premiership top three come the end of the season.

It was not too long ago that Pirates were well and truly in the title race but defeat to Kaizer Chiefs in the Soweto Derby brought an abrupt end to their six-game winning streak in the league.

And a 0-0 draw with Golden Arrows in Clermont at the weekend all but appeared to extinguish any lingering hope of the Buccaneers having a shot at the title.

But considering how far the Sea Robbers have come since the dark days of Rulani Mokwena, Zinnbauer would be content with qualification for continental football.

"The focus is really on next season. The target is to have a good squad for next season. This season, if you give me a place in the top three, I will take it. I can also fancy playing in the Champions League... it's good, but it not easy."

And without divulging too much information, the Bucs mentor is already turning his attention to the transfer market as he looks to further strengthen his squad.

"For us it's important to create more competition in the team, to have an improved squad next season," said the German tactician.

Pirates' next assignment is against Mamelodi Sundowns, whom they beat 1-0 earlier in the season in what was only Zinnbauer's fourth game in charge.

Related Links
Clark takes aim at Katjiukua for 'schoolboy error'
Affonso out for three months after surgery
'Sad to play' in empty stadium, says Juventus chief
Share
Next on Sport24
Pitso on Wits sale: In Europe names remain, in South Africa we change the names