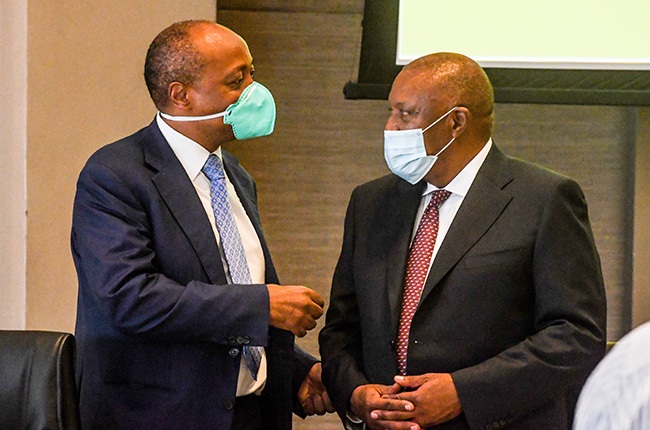 Chairperson Irvin Khoza, who built the billion-rand Premier Soccer League (PSL) on the back of shrewd broadcast rights deals since its 1996 inception, broke down some of the broadcasting challenges awaiting newly elected CAF president Patrice Motsepe.

Motsepe was unveiled to South African media in Sandton on Tuesday for the first time since becoming the country's first CAF president. The press conference was beamed live across the continent.

The same luxury, however, isn't afforded to some of CAF's most prominent competitions such as Africa Cup of Nations qualifiers, CAF Champions League and CAF Confederation Cup.

On the day Motsepe spoke in Johannesburg, CAF were broadcasting a marquee Champions League fixture between 2016 winners Mamelodi Sundowns and five-time winners TP Mazembe on their Facebook page.

Blackouts are a regular occurrence, with frustrated football followers resorting to illegal and unsafe internet live streams to see their teams play.

"The issue of broadcasting is a very challenging one," said Khoza.

"I'm not privileged like Dr Jordaan, who is on the CAF executive committee, to understand the details of a contract that was cancelled. Broadcasting is a challenging environment.

"When you talk about broadcasting, you must talk about content. How compelling is your content, to be on the platform?

"Unfortunately, the world is evolving and platforms are emerging every day, which are now diverting audiences to various platforms.

"If your platform is not attractive enough, then you are bound to have challenges. Without casting any aspersions, but what I've noticed is that most broadcasting houses on the continent are not commercial.

"When you're not commercial, it's difficult for you to have enough resources to buy broadcast rights and compete with what's on the table.

"Then you have encroachment of international companies, who buy broadcasting rights and make it difficult for those rights to be accessed by people.

"It's good to say we must broadcast our own games, but it takes resources for those games to be on television."

Khoza, who was instrumental in SuperSport's blockbuster acquisition of the PSL's television rights in 2007, emphasised that African football needed desirable content to attract broadcast money.

"If you don't have a product, you can't attract television," he said.

"We have so much material to provide that product. The solutions are in the air and it's up to us to harness them.

"If we attract lots of eyeballs, lots of traffic, then it becomes easy. It's a question of [figuring out] what the market is looking for.

"The market has become fragmented because of choices of the new markets that are coming up, especially among the youth. The youth are not like us where we were fixed to linear television.

"They go to other platforms that we don't even know. Jessica (Motaung) will tell you that every week when games are televised, there are a lot of unauthorised streams taking place, mushrooming every day. And they are not paying money to anybody.

"These are the challenges I see from the outside looking in."

Khoza also congratulated Motsepe on his ascendance to the CAF presidency, saying CAF has been crying out for solutions-based leaders.

"CAF and Africa are looking for people with solutions. CAF and the continent is blessed to have you steering its fortunes going forward," said Khoza.

"You're a businessman ... everything you've touched has been successful. Bring us along with you.

"But one central message, which will make you successful in this most challenging endeavour, is to utilise the collective intelligence available to you.

"There is no room for failure as expectations are very high."

We live in a world where facts and fiction get blurred
In times of uncertainty you need journalism you can trust. For only R75 per month, you have access to a world of in-depth analyses, investigative journalism, top opinions and a range of features. Journalism strengthens democracy. Invest in the future today.
Subscribe to News24
Next on Sport24
Msakni strikes as Tunisia shock Nigeria in Africa Cup of Nations