Federer made to work in Bercy 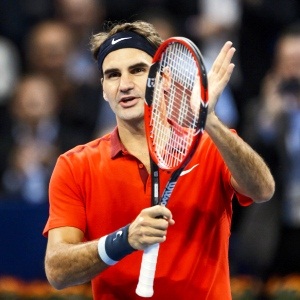 Paris - Roger Federer has kept up his hopes of finishing the year as world number one when he downed Frenchman Jeremy Chardy 7-6 (5) 6-7 (5) 6-4 in the second round of the Paris Masters on Wednesday.

The world number two, who has a chance of leapfrogging Novak Djokovic at the top of the rankings and equalling Pete Sampras' record of ending six seasons as the number one, knew Chardy would be a tough nut to crack and he didn't disappoint at Bercy.

Chardy, who beat Federer in their previous encounter at the Rome Masters earlier this year, saved two match points in the second set.

The second-seeded Swiss however claimed the deciding set in more comfortable fashion to set up a third-round meeting with France's Lucas Pouille or Italian Fabio Fognini.

It went much more smoothly for eighth seed Andy Murray who is within one match of securing his place in the ATP World Tour Finals next month after easing past local favourite Julien Benneteau 6-3 6-4.

The Scot, who needs to reach the last eight here to book his ticket to the Nov. 9-16 Finals in London, next meets ninth seed Grigor Dimitrov.

Bulgarian Dimitrov, who also has a chance to qualify for the season-ending tournament, destroyed Uruguay's Pablo Cuevas 6-0 6-3.

"He gave me a good start," Murray told reporters. "He served three double faults in a row in his first service game.

After dropping outside the top 10 following his U.S. Open quarter-final exit, Murray began a late push for a spot in the London showpiece event which features the best eight players this season.

Murray, in his sixth consecutive week on the tour, has won titles in Valencia, Vienna and Shenzhen and he appeared in great form again on Wednesday when he was rarely threatened by Benneteau.

Earlier, third-seeded Swiss Stan Wawrinka won for the first time in more than a month as he beat Austrian wunderkind Dominic Thiem 6-4 7-6 (6).

Wawrinka, who has already qualified for the Tour Finals, lacked consistency but prevailed on the important points, relying on his superb backhand.

The Swiss lost his first match at the previous three tournaments he entered.

"I know my level of game is here. What I still miss is winning matches," said Wawrinka.

"I started this tournament off pretty well, which I usually don't do, because usually I need time to adapt. But today I played well from the start."

Results on the third day of the ATP Paris Masters on Wednesday (x denotes seeding):

* Nadal has withdrawn due to appendicitis

** Cilic qualifies as US Open champion

We live in a world where facts and fiction get blurred
In times of uncertainty you need journalism you can trust. For only R75 per month, you have access to a world of in-depth analyses, investigative journalism, top opinions and a range of features. Journalism strengthens democracy. Invest in the future today.
Subscribe to News24
Related Links
London calling for Murray
SA draw Turkey in Davis Cup
Wawrinka wins at Paris Masters
Next on Sport24
Murray encouraged by 'positive signs' despite Rotterdam exit