Anderson still has a chance to achieve ‘big goal’ 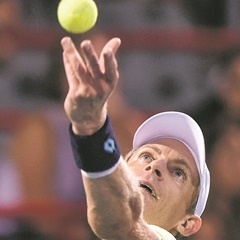 FORTUNE SMILES: Kevin Anderson is in with a chance to qualify for the ATP World Tour Finals. (Minas Panagiotakis, Getty Images)

Johannesburg - Kevin Anderson’s chances of qualifying for his first Association of Tennis Professionals (ATP) Nitto World Tour Finals may have suffered a setback but he can still make history.

The South African returned to the competition two weeks ago for the first time since reaching the final of the US Open.

Anderson was upset by the unseeded Ryan Harrison at the Japan Open in Tokyo and then lost to Jan-Lennard Struff of Germany in the second round at the Shanghai Masters a few days ago.

The 31-year-old recently told ATP media in a TV interview that “it’s a big goal”, to qualify for the ATP Tour Finals.

He jumped to 15th in the world standings after his memorable US Open run.

The tournament serves as the season-ending championship for players on the ATP Tour.

The qualification procedure takes into account the top seven players in the ATP rankings on the Monday after the final ATP World Tour tournament, which is the 2017 Paris Masters from October 30 to November 5.

Also included are the two 2017 Grand Slam tournament winners ranked anywhere from 8th to 20th, as well as the eighth-ranked player in the rankings.

Two 2017 Grand Slam winners Rafael Nadal and Roger Federer are on position one and two, which opens slots for the likes of the Johannesburg-born Anderson and others.

Anderson is placed 10th on the tournament table to qualify with 55 points behind American Sam Querrey, who is ninth.

The eight players who qualify for the event are split into two groups of four and compete in a round-robin format.

The two players with the best results in each group progress to the semifinal, where the winners of each group face the runners-up of the other group in a knock-out.

The absence of big name players who are ranked higher than Anderson, such as world number three Andy Murray, number six Novak Djokovic and number eight Stan Wawrinka, due to injuries, works in the South African’s favour.

Murray announced that he is unlikely to play again this season due to a hip injury that forced him to miss the US Open.

Djokovic said in July that he was taking an injury-forced break from the game, and Wawrinka underwent knee surgery before this year’s US Open.

Having started the year at No 80, it has been an amazing year for the lanky Anderson.

He still has three events before the finals, provided he is healthy, but he needs to start winning consistently.

Two years ago, he finished a few spots shy of a maiden ATP Finals appearance. A strong finish to the year will put him well within the mix again for London.

The event will be played at the O2 Arena in London.