London - Andy Murray has set his sights on a dream finish to 2016 for himself and brother Jamie as they target ATP Tour Finals glory.

Both Andy and Jamie are through to the semi-finals of the Tour Finals in the singles and doubles respectively.

Andy stepped up his bid to retain the world number one ranking when he crushed US Open champion Stan Wawrinka 6-4, 6-2 in his last group match on Friday.

Jamie and Brazilian partner Bruno Soares also had plenty to celebrate on Friday when defeat for Nicolas Mahut and Pierre-Hugues Herbert confirmed they will finish the year as the world's top ranked doubles team.

Andy will face big-serving Canadian Milos Raonic in the semi-finals on Saturday.

With the Murray brothers within touching distance of lifting the silverware on finals day on Sunday, Andy reflected on a memorable period for the Scottish stars, who have won a combined three Grand Slam titles and one Olympic gold in 2016.

"The whole year has been fantastic for both of us. Obviously we would like to finish it perfectly if we can," Andy said.

"Still there's a good chance that doesn't happen. But, regardless of what happens over the weekend, we can look back on this year and be very proud of what we've done as a family.

"We were always competing against each other from a young age. Now we don't, I think we're probably each other's biggest fans.

"It's really special to get to watch what he's achieved in the biggest competitions in the sport.

"Neither of us ever would have expected this when we were growing up. We need to try and enjoy it."

Andy only needed a set against Wawrinka to make the last four and he quickly wrapped up that part of the equation before going on to avenge last year's Tour Finals exit at the hands of the Swiss.

"I weathered the early storm a little bit. Stan came out hitting the ball huge. He was hitting a lot of winners, a lot of aces," Murray said.

"But, once I got through the early part of the match, I started to create chances in most of his service games. I served very well myself. I got a lot of free points with my serve."

While the rest of the tennis world looks ahead to what would be an enthralling winner-takes-all clash between Murray and defending champion Djokovic in the final, the Scot is getting carried away.

Murray is all too aware of the dangers posed by Raonic, even if he has won their five meetings this year, including in the Wimbledon and Queen's final just across London.

And, asked if he was relieved to avoid playing Djokovic in the last four, Murray underlined the threat posed by Raonic.

"There's a good chance that, if I want to win the tournament, I would have to win against Novak. That would either be in the semis or the final. I don't think that makes a whole lot of difference," Murray said.

"I've got a big match obviously against Milos now, a tough one. I'm certainly not taking anything for granted. I know it will be hard. I know I'll need to play well to win.

"But I feel like my game's in a good place. I played much better today than I did a couple of days ago. Physically I feel good. So I'm looking forward to the weekend." 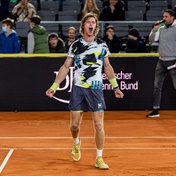