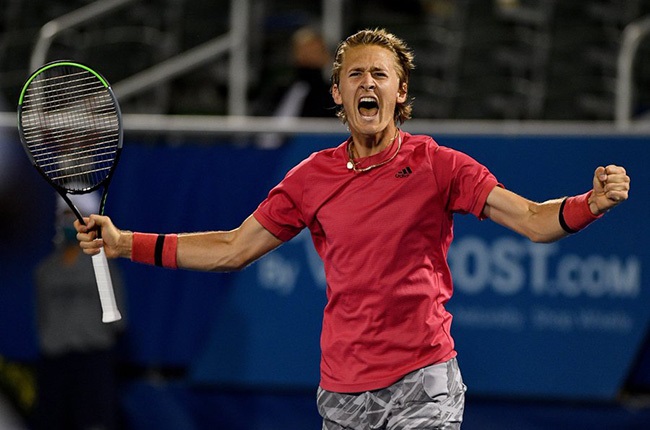 Sebastian Korda kept his nerve to topple second-seeded John Isner 6-3, 4-6, 6-3 on Monday and reach the semi-finals of the ATP Delray Beach Open in Delray Beach, Florida.

Korda, ranked 119th in the world, was serving for the match when he fell behind 0-40 against his big-serving compatriot.

But the former junior world No 1 battled back to book his first ATP semi-final in one hour and 51 minutes.

"I was super-happy with how I played that whole game," Korda said of the clincher. "I mean, he played an incredible first three points.

"The way he played those, I was like, 'Too good.' I couldn't really do anything. He came to the net, he played big balls, he played a super-good three points.

"I just stuck with it, I got a little bit more aggressive," said the 20-year-old, who will play Britain's Cameron Norrie for a place in the final.

"He fought real hard, and I managed to get a little bit lucky in the third set there with a couple netcords and a couple close calls," Norrie said. "Real fortunate to get through."

Harrison, ranked 789th in the world, had toppled Chilean top seed Cristian Garin to reach the quarter-finals and said it felt "pretty amazing" to find himself in the last four.

His three match wins this week already exceed the two tour-level victories he had coming into the event, and he'll try to add another when he takes on fourth-seeded Hubert Hurkacz for a place in the final.

Poland's Hurkacz advanced with a 6-4, 6-4 victory over Ecuador's Roberto Quiroz.

We live in a world where facts and fiction get blurred
In times of uncertainty you need journalism you can trust. For only R75 per month, you have access to a world of in-depth analyses, investigative journalism, top opinions and a range of features. Journalism strengthens democracy. Invest in the future today.
Subscribe to News24
Related Links
Djokovic, Nadal, Serena to quarantine in Adelaide, not Melbourne
Why Federer is skipping the Australian Open
Ukraine's Yastremska suspended after failing dope test
Next on Sport24
Back injury thwarts Nadal's planned Acapulco return