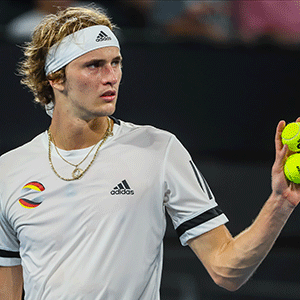 Sydney - Alexander Zverev and Stefanos Tsitsipas both crashed to defeat in their first matches of the year on Friday as day one of the inaugural ATP Cup sprung some big upsets.

It led to both Germany and Greece being defeated in their opening ties at the 24-nation event, where the countries are split into six groups across Sydney, Brisbane and Perth.

The top eight from the round robin go onto the knockout phase in Sydney before one is eventually crowned the winner.

Along with Australia and Canada, Belgium also won, sweeping Moldova 3-0, while tennis minnows Norway pulled off a big 2-1 upset against the United States.

Drawcards Rafael Nadal and Novak Djokovic make their debut on Saturday, for Spain in Perth and Serbia in Brisbane respectively.

"It's definitely up there," said de Minaur in Brisbane, when asked how the victory ranked in his career. "This one feels very, very good.

"I have a great team. My captain, my coach were all making sure I stayed in the moment and told me I would have chances."

"First game, first match of the year is always going to be tough," said Kyrgios, who has pledged Aus$200 (US$140) for every ace he serves during the Australian tennis summer to help victims of bushfires that are raging across Australia.

"To be honest, I was actually pretty happy with my performance."

Tsitsipas went into his match with Shapovalov, also in Brisbane, as slight favourite, with the Canadian ranked nine places below him.

But Shapovalov's left-handed serve was working beautifully and Tsitsipas faltered at key moments in both tiebreaks.

"His serve was better than mine and a few points in the tiebreak, I didn't work out what I had to do and I didn't have a clear picture of how I have to play," said the Greek.

The United States were also upset, with emerging Norwegian youngster Casper Ruud beating big-serving John Isner. He then backed up in the decisive doubles alongside Viktor Durasovic to ensure the win.

The ATP Cup, from January 3-12, features two ties each day in the three cities during the round robin, comprising two singles matches then a doubles.

Some $15 million in prize money and up to 750 singles and 250 doubles ATP rankings points are at stake.

Under the innovative tournament rules, on-court coaching is allowed and team zones are in the corners of the court, rather than on the sidelines by the umpire.

Real-time statistics, data and match vision are also available to the captain and players during the match, and there is a video review system to challenge contentious decisions like foot faults.

"The area in the corners are great to see the match. It's very nice also to have, for my part, two coaches on my right and on my left during the matches. It's something great."

Despite his defeat, Tsitsipas said he too was loving the new tournament format.

"It's good. I mean, I cannot picture anything better than this right now," he said.