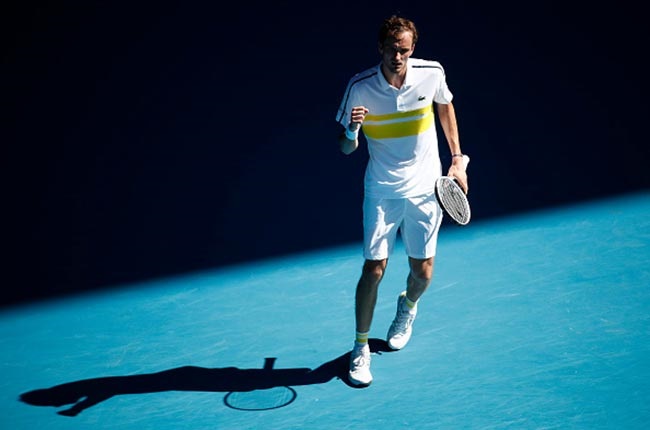 A badly cramping Daniil Medvedev won a brutal all-Russian clash against Andrey Rublev on Thursday to move into his first Australian Open semi-final, warning he was playing at "an amazing level".

The fourth seed had more firepower than his younger, eighth-seeded rival in scorching conditions on Rod Laver Arena, grinding him down 7-5, 6-3, 6-2 to extend his win-streak to 19 matches.

His reward is a last-four clash with either 20-time Grand Slam champion Rafael Nadal or fifth-seeded Greek Stefanos Tsitsipas.

"I would say the three last points when I was getting ready for the serve I could not really move my left leg," he said, with both players cramping in the "super-tough" conditions.

"But I've known him a long time and I know how to neutralise his big shots. That's definitely one of the best matches I've played lately, not even just here but last year," Medvedev added.

Medvedev is now riding a 19-match run dating back to November, taking in titles at the Paris 1000, the ATP Finals in London and the ATP Cup with Russia in the lead-up to the opening Grand Slam of the year.

He is into his first semi at Melbourne Park as he continues to knock on the door of Grand Slam success, having reached the 2019 US Open final and the last four in New York in 2020.

"Andrey I think at this moment is on fire, starting last year, so he was definitely for me one of the favourites to go far in this tournament," Medvedev said.

"To win this match in three sets, especially how physical it was, I mean, it was an amazing level from me, and I'm really happy about it."

Medvedev owned a 3-0 advantage against his former junior foe ahead of their clash, having beaten him over three tough sets at their last meeting in the 2020 US Open quarter-finals.

And little separated them in the opening set on Thursday as they traded long baseline rallies until a stunning passing shot gave Medvedev his first break points in game 12, which he calmly converted to take the set.

Using ice-towels to keep his temperature down, Medvedev was relentless.

After a marathon, 43-shot rally, where he covered 130 metres around the court, he earned another break point at 3-2 in the second set, but Rublev hung on.

However, it was only a matter of time before he struck again and after Rublev hit a stray forehand in game eight to give him a 5-3 lead, Medvedev served out for the set.

Rublev, who had made three Slam quarter-finals before but never gone further, looked exhausted and Medvedev broke straight away in the third set.

Rublev quickly went 0-3 down, shaking his head at the changeover as he sloshed water on his face to try to revive himself.

But he was spent and Medvedev shut out the pain of cramping leg to reach the finish line.

Results from Day 10 of the Australian Open Grand Slam tennis tournament at Melbourne Park on Wednesday:

We live in a world where facts and fiction get blurred
In times of uncertainty you need journalism you can trust. For only R75 per month, you have access to a world of in-depth analyses, investigative journalism, top opinions and a range of features. Journalism strengthens democracy. Invest in the future today.
Subscribe to News24
Related Links
Barty pooper: Aussie top seed crashes, just as fans cleared to return
Snap lockdown quashes Melbourne outbreak, tennis fans poised to return
SA's Kgothatso Montjane loses in Australian Open doubles final
Next on Sport24
South African Craig Tiley receives universal praise for handling of Australian Open