Cape Town - It was a routine day in the office for South African Raven Klaasen and his New Zealand doubles partner Michael Venus at the US Open on Wednesday.

The South African/Kiwi combo won through to the second round in New York with a solid 6-2, 6-2 win over Lukas Lacko (Slovakia) and John Millman (Australia).

Seeded eighth, Klaasen and Venus are hoping to match their fine performance at Wimbledon in July where they reached the final.

Ranked sixth in the doubles race to London, a good finish at the US Open will dramatically improve their chances of securing a spot in the year-end ATP World Tour Finals where the best eight year-end ranked teams battle for world championship honours.

In sweltering hot and humid conditions where temperatures at 11:00 reached 38 degrees, Klaasen and Venus kept cool, calm and collective as they dominated their opening round straight set win in a match lasting only 55 minutes.

“We felt good out there today and the win was a good start to our campaign,” Klaasen afterwards.

“First round matches are never easy in Grand Slams as you need to settle into the courts and atmosphere, so Michael and I are happy with the way we especially executed the first serve and dominated the points on serve.”

Klaasen and Venus were serving at an impressive 64% first serve percentage and winning 93% of the first serve points. They also won four of the eight break points thrown at them whilst their opponents failed to win any of the two break point opportunities they had.

“Our opponents are good singles players both ranked in the world’s top 100 so they have effective serves and returns so we had to get on top of them early from the start of the match which we did,” added Klaasen. 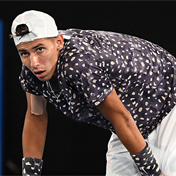