Auckland - Former world number one Ana Ivanovic maintained her sizzling form on Friday to storm into the final of the Auckland Classic, setting up a decider with seven-time Grand Slam champion Venus Williams.

Second seed Ivanovic dominated her doubles partner Kirsten Flipkens 6-0, 7-6 (7/3) in their semi-final, while Williams benefited from a walkover after fifth seed Jamie Hampton pulled out with an injury.

Ivanovic made the perfect start, breaking Flipkens three times to take the first set from the Belgian 6-0 in just 22 minutes.

Flipkens, who committed 13 first set unforced errors and three double faults, recovered to force a tie-break in the second.

But Ivanovic, who has not dropped a set in the tournament, never looked troubled and comfortably wrapped up the match.

The win gives the Serb, who has failed to capitalise on her sole Grand Slam success at the 2008 French Open, the chance to win her first WTA Tour title since November 2011.

It will be a confidence booster for the world number 16 ahead of Saturday's showdown with Williams, who has won eight of their nine previous meetings.

Ivanovic said she did not know if Williams, 33, would benefit from a day's rest.

"It's not really a disadvantage or an advantage -- it's really in your game and your match," she said. "It's going to be a tough one and I look forward to the challenge."

Williams advanced when Hampton withdrew after injuring her right hip during a morning warm-up.

It will be her first appearance in a WTA final since she won a tournament in Luxembourg in October 2012. She claimed her last Grand Slam in 2008.

Now ranked 47 and unseeded in Auckland, Williams is seeking to rejoin the game's elite after struggling with auto-immune disease and injury.

Hampton, a finalist here last year, said she was on the practice court when her hip "jammed" and she decided to concede after consulting with medical staff.It's incredibly disappointing," she said, adding that she was also likely to miss next week's Sydney International in a bid to avoid aggravating the hip before the Australian Open. 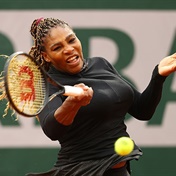