Simona Halep ousted Garbine Muguruza in three sets on Sunday to advance to her third Italian Open final in front of the first set of spectators allowed in the stands at this year's tournament.

A small number of fans saw top seed Halep hold off a late Muguruza fightback to advance 6-3, 4-6, 6-4 in just over two hours, in a battle of former French Open champions before Roland Garros starts in a week's time.

Up to 1,000 fans are allowed at open-air sports events in Italy as of Sunday.

"I know I had so many chances to finish it a little bit faster and easier, but as we saw, she doesn't give up," said Romanian Halep.

After pulling level at one set each, Spanish ninth seed Muguruza slumped to 5-1 in the third, before pulling out a string of winners to draw to within one game of Halep.

Serving to stay in the match, though, she hit successive double faults to hand Halep victory.

"It's always, you know, good vibe and good feeling when I win against her. I feel confident now that I was able to win this match."

She won the Dubai title in February, before the coronavirus lockdown, coming back to claim victory in Prague last month having skipped the US Open.

The 2018 French Open winner will next play either defending champion and second seed Karolina Pliskova or Czech Marketa Vondrousova for the title.

The 28-year-old lost her two previous finals at the Foro Italico in Rome in 2017 and 2018 to Ukrainian Elina Svitolina, who exited in the quarter-finals this year.

"I'm not playing Svitolina so I have a plus," said Halep.

"I have just to manage it a little bit better than previous years.

"But now I'm more mature, I really think. So let's hope that I can be better tomorrow and to win it."

For Muguruza it was a fourth semi-final defeat in Rome, ahead of her challenge to recapture the French Open she won in 2016.

"Of course I wanted to hold the trophy, but played good matches against great opponents," she said.

"I had a lot of positives to take of this week, especially coming to a Grand Slam.

"So just now a little bit of recovery, you know, take care of my body, because it's another long battle is coming few days."

We live in a world where facts and fiction get blurred
In times of uncertainty you need journalism you can trust. For only R75 per month, you have access to a world of in-depth analyses, investigative journalism, top opinions and a range of features. Journalism strengthens democracy. Invest in the future today.
Subscribe to News24
Related Links
Nadal hopeful he can address the issues in his game before French Open
Defending champion Pliskova through, Halep meets Muguruza in Rome semis
Rafael Nadal stunned in Rome before French Open title defence
Next on Sport24
Coco Gauff through to second round at Ostrava 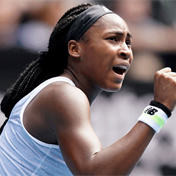