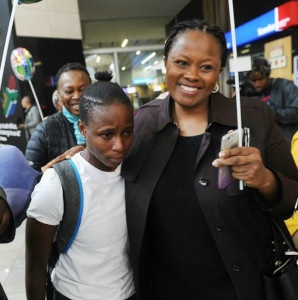 An emotional Kgothatso Montjane was welcomed by WDB Trust CEO Nomgqibelo Mdlalose on her return to SA (Facebook).

Cape Town - South African wheelchair tennis star, Kgothatso Montjane, returned to the country on Monday where she was greeted by not only her family and friends but also by many of her fans

Montjane recently made it to the semi-finals of the wheelchair tennis event at the All England Club, eventually losing to top seed and defending champion Diede de Groot of the Netherlands, 1-6, 5-7.

Montjane was awarded a wild card into the prestigious grass-court tournament to become the first African wheelchair tennis player to ever take part in the event.

After her heroic display at Wimbledon, Montjane flew into OR Tambo where her supporters awaited her arrival

Montjane broke into tears when entering the international arrival hall on seeing the massive support gathered waiting for her return.

“This is very emotional moment for me, especially with my family and friends here. It’s such a great feeling,” said an emotional Montjane during press conference that followed her arrival.

“The past few weeks have been hectic, but the experience was incredible with participation at The All England Lawn Tennis Club being a highlight. Thank you to everyone for the love during the past few weeks,” added Montjane.

#Wheelchairtennis ace @Montjane_K broke into tears when she walked through the gates of the international arrivals terminal at OR Tambo International Airport earlier today and was greeted by a crush of fans, family, supporters and media following her @Wimbledon success. pic.twitter.com/lOJXuo7E4e

We live in a world where facts and fiction get blurred
In times of uncertainty you need journalism you can trust. For only R75 per month, you have access to a world of in-depth analyses, investigative journalism, top opinions and a range of features. Journalism strengthens democracy. Invest in the future today.
Subscribe to News24
Related Links
Nadal sitting pretty atop ATP Tour rankings
Cecchinato beats Pella to win Croatia Open
Johnson beats Ramanathan to claim Newport title
Next on Sport24
Becker accused of failing to hand over Wimbledon trophies