Wimbledon set to be cancelled for first time since WWII 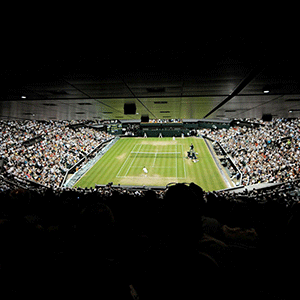 Wimbledon looks certain to be scrapped for the first time since World War II by tournament chiefs on Wednesday as the coronavirus wreaks further havoc on the global sporting calendar.

The cancellation of the only grass-court Grand Slam tournament at the All England Club would leave the tennis season in disarray after the French Open was controversially moved and all events cancelled until 7 June.

Wimbledon, in leafy southwest London, is due to run for two weeks from 29 June, with Novak Djokovic and Simona Halep set to defend their singles titles.

A decision to scrap the tournament is widely expected, with the world struggling to contain the spread of Covid-19, which has infected more than 840 000 people worldwide and killed over 40 000.

Lead-up tournaments in the short grass-court season are also likely to be scrapped following talks on Tuesday, understood to have involved Wimbledon chiefs and the game's governing bodies.

Organisers had earlier ruled out playing the Grand Slam behind closed doors and postponing the event would also create its own problems.

"I really hope Wimbledon will wait until the end of April for decision!" he tweeted. "The tourney is first week of July... patience is a virtue."

But former women's world No 1 Amelie Mauresmo, the 2006 Wimbledon champion, said the 2020 season would probably need to be scrapped.

"I think that we are going to have to draw a line under the 2020 tennis season," she tweeted.

The cancellation of Wimbledon could mean multiple champions Roger Federer, Serena Williams and Venus Williams have played at the All England Club for the final time.

Federer and Serena will be nearly 40 by the time of the 2021 championships and Venus will be 41.

Serena, beaten in last year's final by Halep, is stuck on 23 Grand Slam singles titles - agonisingly one away from equalling Margaret Court's record.

The conditions required to play on grass in England mean a postponement is impractical and a date later in the summer or early autumn would mean much shorter evenings.

"Each week that passes, you get less and less light to play the tournament," doubles specialist Jamie Murray told the BBC.

American giant John Isner, who won the longest-ever tennis match over three days at Wimbledon in 2010, said the scrapping of the tournament would be a "tough pill to swallow".

"We may have to come to grips with the fact that we may not be playing Wimbledon this year," he told ESPN on Tuesday.

"Wimbledon sort of has to be played this (same) time of year," Isner said.

"With that surface, the event, it seems, has to be played this time and there's a good chance it won't be."

The French Tennis Federation provoked widespread anger with its unilateral decision to move the French Open from its original 24 May start date to begin on 20 September.

That puts the start only one week after the planned date of the US Open men's final.

I really hope Wimbledon will wait until the end of April for decision! The tourney is first week of July ...patience is a virtue https://t.co/PEjVKAqI5w

We live in a world where facts and fiction get blurred
In times of uncertainty you need journalism you can trust. For only R75 per month, you have access to a world of in-depth analyses, investigative journalism, top opinions and a range of features. Journalism strengthens democracy. Invest in the future today.
Subscribe to News24
Related Links
Isner: No 2020 Wimbledon would be 'tough pill to swallow'
Patrick McEnroe tests positive for coronavirus
Murray sees no alternative but to cancel Wimbledon
Next on Sport24
Becker accused of failing to hand over Wimbledon trophies