Riyadh  - Saudi Arabia is to stage its first ever international tennis tournament, a men's exhibition event, in a "watershed moment for the Kingdom", the country's top sports official said on Tuesday.

The $3 million tournament is being staged in Diriyah on the outskirts of Riyadh, the venue for the world heavyweight title rematch between Anthony Joshua and Andy Ruiz Jr on December 7.

Saudi rulers are using sport to try and soften their international image and to provide a showcase, they say, for reforms inside the oil-rich state.

In February they hosted a first European Tour golf event and they are staging next year's Dakar Rally.

All this comes after the Saudis faced intense diplomatic fallout over the murder of dissident journalist Jamal Khashoggi in the conservative kingdom's consulate in Istanbul in October last year.

We live in a world where facts and fiction get blurred
In times of uncertainty you need journalism you can trust. For only R75 per month, you have access to a world of in-depth analyses, investigative journalism, top opinions and a range of features. Journalism strengthens democracy. Invest in the future today.
Subscribe to News24
Related Links
Teenager Gauff makes most of second chance in Linz
Angry Murray accuses Fognini after bitter Shanghai exit
Federer wins Shanghai Masters opener
Next on Sport24
Rublev reaches Vienna quarter-finals - in just 8 minutes 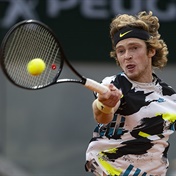