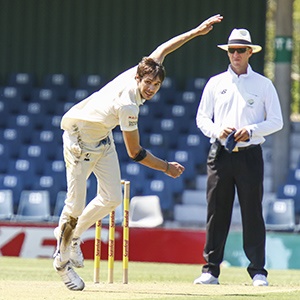 Cape Town - Eldred Hawken continued his excellent induction for the Lions by claiming another five-for that roared them into a powerful position at the halfway stage of their 4-Day Franchise Series clash against the Knights in Johannesburg on Tuesday.

The fast bowler, who claimed eight wickets on debut for the log-leaders in the previous round of games, followed that up with five for 36 as the visitors were rolled over for 158 just as the heavens opened during the late afternoon.

And after they returned, the visitors were asked to follow on and fell into further strife as Beuran Hendricks nabbed two for nine, adding to his earlier four for 54, to make it six in the day for him as the Central Franchise limped to stumps on 33 for three - trailing by 167 runs.

Their two innings were in response to the defending champions amassing 358 earlier in the day, a total built around an impressive 150 (275 balls, 28 fours) by Dominic Hendricks.

The left-hander, 142 not out overnight, initially saw his side collapse woefully from 331 for four to their eventual total - a capitulation of six wickets for just 27 to start the day as Corne Dry ended with five for 84.

But Hawken and Hendricks destroyed the Knights' batting by sharing nine wickets as they were bundled out in 50.5 overs.

Raynard van Tonder ended as the top scorer with 34.

The same two pacemen made the ball talk in the 13 overs sent down in the second dig leaving the away side in all sorts of strife at the close - with 13 Knights wickets eventually sent tumbling on the second day in Johannesburg.

We live in a world where facts and fiction get blurred
In times of uncertainty you need journalism you can trust. For only R75 per month, you have access to a world of in-depth analyses, investigative journalism, top opinions and a range of features. Journalism strengthens democracy. Invest in the future today.
Subscribe to News24
Related Links
India win toss, opt to bowl in second Sri Lanka T20
'Harry the Newlands Hadeda' takes social media by storm
England opener Burns out of Sri Lanka tour
Next on Sport24
Dean Elgar predicts high-intensity domestic cricket season