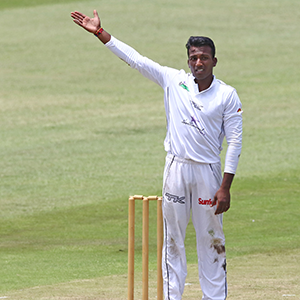 After some substantial rain late on Wednesday and a wet outfield for much of the day on Thursday, the Dolphins added 24 runs for the loss of two wickets as they pursued as many runs as possible to give them enough time to bowl the Cobras out.

Grant Roelofsen was dismissed for 142 while Prenelan Subrayen added eleven and the Dolphins set the hosts a tantalising 224 to win the game.

The Dolphins managed to control the whole of the fourth innings as they picked up wickets regularly with the Cobras sending in their bigger hitters early to try and push for a result.

Muthusamy accounted for the top four in the Cobras innings, with Janneman Malan top scoring with 39.

It became a game of survival for the Cobras, however the Dolphins bowlers did not let up and eventually Muthusamy claimed the wickets of Lizaad Williams and Dane Paterson to bowl them out for 86.

Having been disappointed with their efforts with the bat in the first innings, captain Marques Ackerman couldn't fault the side in the following three innings.

"It was a great win for us today," a relieved Ackerman said. "It has been a tough campaign for us so far but hopefully this result will be the turn around that we need going into the rest of the second half of the season.

"I always felt that it was just a matter of time before it all fell into place and despite our first innings it came together brilliantly starting with Grant's (Roelofsen) hundred."

The Dolphins needed to bowl well in the second innings because it was a sporting declaration from the captain, however Muthusamy showed why he made his Proteas debut recently.

"Senuran's seven wickets were incredible and I am just really happy with the way the boys fought in that second innings to bowl them out for 86.

"We are really stoked and are looking forward to building on this going forward," Ackerman added.

The Dolphins return home to face the table-topping Lions at the Pietermaritzburg Oval next week.

We live in a world where facts and fiction get blurred
In times of uncertainty you need journalism you can trust. For only R75 per month, you have access to a world of in-depth analyses, investigative journalism, top opinions and a range of features. Journalism strengthens democracy. Invest in the future today.
Subscribe to News24
Related Links
Buttler fined for verbally abusing Philander
WATCH | Big Bash boundary catch causes law confusion
Van Nierkerk returns as Proteas women tour New Zealand
Next on Sport24
Lions, Dolphins renew rivalry in 4-Day Franchise Series