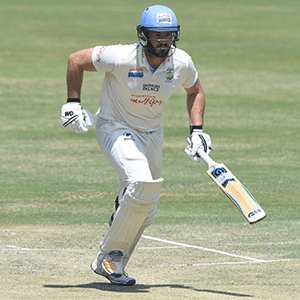 Heinrich Klaasen (66 off 159 balls, 9 fours) supported him well as the pair added 199 unbroken runs for the fifth wicket after coming together with their side in trouble earlier on.

The Warriors had declared on their overnight 310 for seven earlier, leaving the Titans around 70 overs to get the runs.

But they fell into early trouble when Kelly Smuts' (2/20) double left them on 50 for four.

That forced an initial rethink by skipper Thomson and Klaasen, before they later attacked. But they were never going to get there following the poor start and had to settle for a draw.

We live in a world where facts and fiction get blurred
In times of uncertainty you need journalism you can trust. For only R75 per month, you have access to a world of in-depth analyses, investigative journalism, top opinions and a range of features. Journalism strengthens democracy. Invest in the future today.
Subscribe to News24
Related Links
Third Test: Tasty homecoming for Nortje
Muthusamy spins Dolphins to memorable win
Buttler fined for verbally abusing Philander
Next on Sport24
Will revamped domestic cricket system find a place and success under new Covid-19 normal?