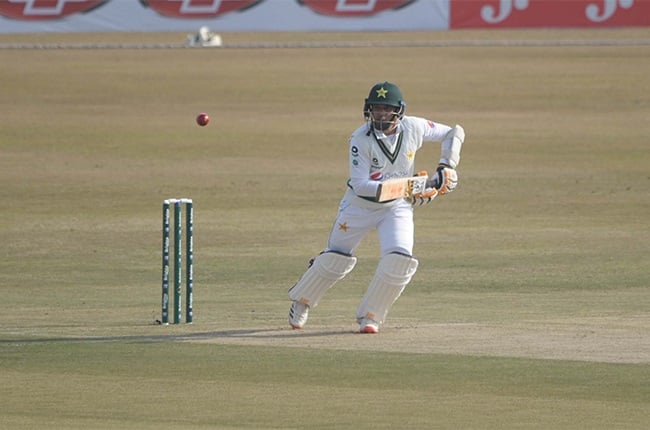 Zimbabwe captain Brendan Taylor paid tribute to Pakistan after the tourists took total control on the second day of the second Test at Harare Sports Club on Saturday, outclassing the home side with both bat and ball to take a huge step towards sealing a 2-0 series victory.

Zimbabwe were 52 for four at the close in reply to Pakistan's 510 for eight declared, 458 runs behind.

After remaining reasonably competitive until lunch on Saturday, Zimbabwe's bowlers took a hammering during the afternoon.

Opening batsman Abid Ali made 215 not out and Nauman Ali slammed 97 before being stumped off a wide.

The pair plundered 169 runs off 199 balls for the eighth wicket.

"They're showing us how to play Test cricket at the moment," admitted Taylor, acknowledging that the afternoon run feast was the culmination of hours of disciplined batting.

"We can learn a lot from their batsmen, the way they apply themselves. They just try and wear you down. At the end of the day your bowlers are almost at the brink. That's what Test cricket is all about."

"You're 150 overs out there fielding and it's never easy getting your mindset around to batting."

The Zimbabwe innings got off to a bad start when 36-year-old debutant Tabish Khan struck in his first over before a run had been scored.

Three more wickets fell before the close and Zimbabwe looked in desperate trouble with Roy Kaia not coming out to bat after being struck a heavy blow on his left knee while fielding at short leg on Friday.

Kaia was Zimbabwe's top-scorer with 48 when Zimbabwe were routed by an innings and 116 runs in the first Test of the two-match series.

"I think he's ruled out for the first innings but he's looking a bit more mobile and hopefully he can come out in the second innings," said Taylor.

Zimbabwe went into the match without three leading batsmen because of injury and Kaia's absence was a further blow.

Even so, Taylor said his side's batting was disappointing.

"We believe we're a far better unit than that. Yes, we're missing some senior players but we've got some young quality there that's certainly capable."

Nauman was 93 not out at tea. He hit the first ball after the interval for four but lifted his back foot after left-arm spinner Tendai Chisoro bowled a wide with his next delivery.

Wicketkeeper Regis Chakabva reacted quickly and took off the bails. He hit 97 off 104 balls with five sixes and nine fours.

Having scored most of his runs behind or square of the wicket in scoring his first 150, Abid blossomed with some handsome drives during the afternoon.

Tabish, a veteran of 598 wickets in 137 first-class matches, shared the new ball with Shaheen Shah Afridi, who started with a maiden over.

Tabish set up Tarisai Masakanda with a series of deliveries outside the off stump then trapped the batsman leg before wicket with a full delivery which snaked back.

Hasan Ali, Shaheen Shah Afridi and off-spinner Sajid Khan all took wickets as only Regis Chakabva, on 28 not out, was able to reach double figures.

Scoreboard at close of play on the second day of the second Test between Zimbabwe and Pakistan at Harare Sports Club on Saturday.

T. Chisoro not out 1

We live in a world where facts and fiction get blurred
In times of uncertainty you need journalism you can trust. For only R75 per month, you have access to a world of in-depth analyses, investigative journalism, top opinions and a range of features. Journalism strengthens democracy. Invest in the future today.
Subscribe to News24
Next on Sport24
Warner, Smith, Cummins skip Windies, Bangladesh tours