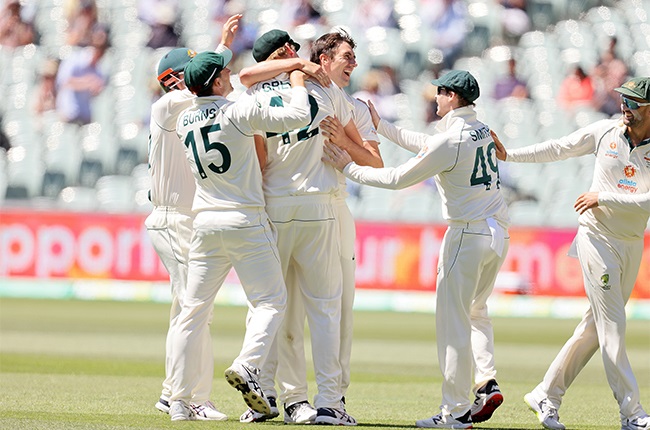 Pat Cummins of Australia celebrates with Cameron Green of Australia after taking a catch to dismiss Virat Kohli of India during day three of the First Test match between Australia and India at Adelaide Oval on December 19, 2020 in Adelaide, Australia.
Daniel Kalisz

A devastated India crashed to their lowest ever score of 36 on Saturday as Australia ran riot to win the opening Test in Adelaide by eight wickets after Josh Hazlewood and Pat Cummins produced a bowling masterclass.

India started the third day of the pink-ball Test on nine for one and with a 62-run lead, looking to build a competitive second innings total for the hosts to chase.

But their hopes were left in tatters by a wicket with bounce and deviation as Hazlewood took 5-8, including his 200th Test wicket, and Cummins 4-21. Wicketkeeper Tim Paine claimed five catches as the bowlers found the edge.

"I didn't expect it to come that quick, I was expecting a real dogfight," said skipper Paine.

"To hang in, give our bowlers a chance, and then turn up and start the day the way we did, full credit to our bowling attack again.

"It's nice to get off to a good start. Chuffed with the way we bowled in this Test." It was an incredible Indian collapse, with no batsman reaching double figures during a capitulation that lasted less than 22 overs, in contrast to their battling first innings' 244.

That included skipper Virat Kohli, who fell for four and now heads home for the birth of his first child, leaving his stunned team to face three more Tests, starting in Melbourne on Boxing Day, without him. Ajinkya Rahane will assume the captaincy.

"It's very hard to put those feelings into words," said a disconsolate Kohli.

"We had a lead of 60-odd when we arrived, and then just collapsed. We played two days of good cricket to get in a position and then just lose it in an hour. It really hurts."

India's previous Test low was 42 against England at Lord's in 1974. Their 36 was the joint fourth lowest of all time, with New Zealand's 26 facing England in 1955 at Auckland the worst ever.

The carnage left Australia, who scored 191 in the first innings, needing 90 to win, with out-of-form Joe Burns hitting a confidence-building 51 not out, including a six to win the match.

Matthew Wade made 33 and Marnus Labuschagne six with Steve Smith not out one.

Cummins wasted no time removing nightwatchman Jasprit Bumrah for two in the second over of the day, temping him to push at a slower ball that popped back up to him.

That brought the stubborn Cheteshwar Pujara to the crease. He saw off an over from Cummins, but that was as good as it got for the veteran who fell without scoring.

Cummins, the world's number one Test bowler, sent down a delivery that had to be played and Pujara caught an edge that carried to wicketkeeper Paine.

It left India on 15 for three, and it only got worse with opener Mayank Agarwal back in the pavillon five balls later for nine, again caught by Paine on Hazlewood's opening delivery.

Hazlewood and Paine again combined to get rid of Rahane for nought, after which Cummins picked up the massive wicket of Kohli.

The superstar batsman had smacked Cummins for four but was gone the next ball after a review, caught by debutant Cameron Green as he attempted a cover drive.

At 19 for six, India were in real danger of making their lowest ever score and when Wriddhiman Saha (4) chipped a Hazlewood delivery to Marnus Labuschagne and Ravi Ashwin was out next ball it became a reality.

A four from Hanuma Vihari spared them some shame, taking India past New Zealand's all-time low.

But Vihari (8) didn't last much longer, caught by Paine with Hazlewood again doing the damage to complete an excellent five-wicket haul, before Mohammed Shami was forced to retire hurt after a Cummins thunderbolt hit his right arm.

Scorecard after Australia beat India on the third day of the first day-night Test between Australia and India at the Adelaide Oval on Saturday:

We live in a world where facts and fiction get blurred
In times of uncertainty you need journalism you can trust. For only R75 per month, you have access to a world of in-depth analyses, investigative journalism, top opinions and a range of features. Journalism strengthens democracy. Invest in the future today.
Subscribe to News24
Related Links
Australia dismiss India for 36 - their lowest ever Test score
CSA interim board hope to 'encourage and not compel' Proteas to act on Black Lives Matter
CSA confirms 2 Proteas players test positive for Covid-19 ahead of Sri Lanka Tests
Next on Sport24
LIVE | IPL - KKR secure crushing 9 wicket win over RCB

Choose your newsletters
Voting Booth
With the Springboks losing their last two matches against Australia, how concerned are you?
Please select an option Oops! Something went wrong, please try again later.
Very concerned! Something is not right ...
59% - 1784 votes
I'm not worried. Every team has a bad game. The Boks will bounce back.
17% - 517 votes
It's too early to tell. Let's see how they go against the All Blacks.
24% - 731 votes
Previous Results
Showmax
How Jurgen Klopp saved Liverpool