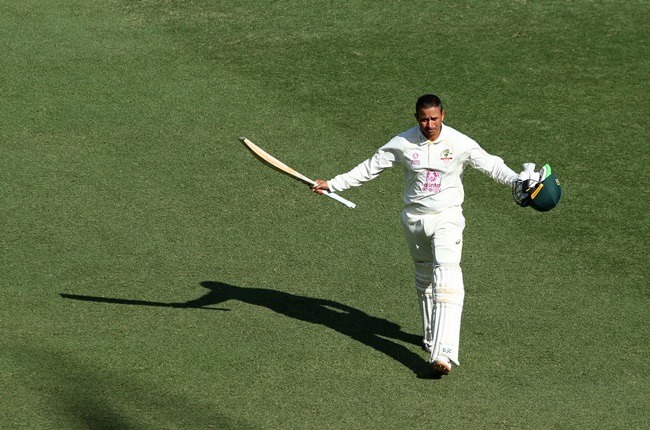 Usman Khawaja said he felt elated at scoring a hundred in the country of his birth Pakistan and was pleased with the chants of "Khawaja, Khawaja" from the crowds on the opening day of the second Test in Karachi on Saturday.

Khawaja's unbeaten 127 was the cornerstone of Australia's dominating 251-3, with Steve Smith also contributing 72.

The 35-year-old has made the most of a recall to the national side, missing out on a hundred in the first Test at Rawalpindi by three runs after scoring centuries in both innings in his return match against England.

"Look, it's very nice, they were saying 'Khawaja, Khawaja" and they said that in Rawalpindi as well," said Khawaja, who was born in Islamabad before migrating with his parents to Australia as a four-year-old.

("The fans) have been great and very supportive, I couldn't have asked for more.

"Khawaja said a few of his relatives were also in the stands at the National Stadium.

"I do have four members of the family in the crowds,' said Khawaja. "I have a big family in Karachi because my mother is from here.

"His unbeaten 127 included 13 boundaries and a six, with Smith providing support at the other end until he fell to a sharp Hasan Ali delivery with seven balls left in the day.

The ball made Smith play and barely carried to slip where Faheem Ashraf pounced to his left for a brilliant grab.

Pakistan could have claimed another wicket on the day's final ball but Imam-ul-Haq put down nightwatchman Nathan Lyon at short leg off Shaheen Shah Afridi.

All-rounder Ashraf -- recalled after missing the first Test due to injury -- snagged the first breakthrough, getting the ball to nip away and drawing an edge from David Warner (36) straight into the gloves of keeper Mohammad Rizwan.

Marnus Labuschagne was run out for nought nine deliveries later. But from then until the second last over of the day, Australia looked in complete control, with Khawaja leading the charge.

He pushed spinner Sajid Khan for a sharp single towards square leg to reach the landmark, punching the air to celebrate his tenth Test ton -- drawing applause from a crowd of 10,000 people at the National Stadium.

He first put on a solid 82-run stand for the opening wicket with Warner, who looked dangerous and greeted Sajid into the attack with two sixes.

Then Khawaja repaired the innings alongside Smith, who struck seven boundaries in a cautious 35th Test half-century.

The duo frustrated Pakistan's attack forcing spinners Nauman Ali and Sajid to resort to a negative leg-side line to contain the runs, and only 36 were scored in the hour after tea in 17 overs.

Pakistan skipper Babar Azam came on to bowl and used part-timer Azhar Ali on the other end to complete the 80 overs before the second new ball, with the score at 235-2.

Australia made one change for the match, with leg-spinner Mitchell Swepson making his Test debut in place of pacer Josh Hazlewood, while Pakistan have brought in Hasan Ali and Ashraf.

Australia are on their first tour of Pakistan since 1998, having previously refused to visit the country over security fears.The third and final Test is in Lahore from March 21-25.

We live in a world where facts and fiction get blurred
In times of uncertainty you need journalism you can trust. For 14 free days, you can have access to a world of in-depth analyses, investigative journalism, top opinions and a range of features. Journalism strengthens democracy. Invest in the future today. Thereafter you will be billed R75 per month. You can cancel anytime and if you cancel within 14 days you won't be billed.
Subscribe to News24
Next on Sport
The power's back! Proteas head for World Cup in better fettle