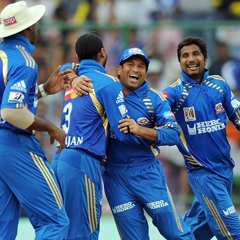 Mumbai Indians (AFP)
Delhi - The Mumbai Indians defeated the Rajasthan Royals by 33 runs at the Feroz Shah Kotla Stadium on Sunday to add the Champions League T20 crown to the IPL crown they won earlier this year, reports the supersport.com website.

In a match billed as the last battle between two of the world's best batsmen, Rahul Dravid and Sachin Tendulkar, it was the younger and more inexperienced players that stole the show.

Dravid won the toss and sent the Mumbai Indians in to bat first. Mumbai muscled up 202 for six in their 20 overs and then proceeded to bowl the Rajasthan Royals out for 169 in 18.5 overs.

After the first 10 overs, Dravid’s decision looked to be the correct one as they restricted Mumbai to 60 for one. But some big-hitting from Glenn Maxwell, Rohit Sharma and Dinesh Karthik launched the Mumbai Indians to their daunting total.

Dwayne Smith was slightly more circumspect in his top-scoring knock of 44, which came off 39 balls and included five boundaries and one maximum.

Tendulkar (15) looked to be in good form but had his off-stump uprooted by Shane Watson after the Little Master had dispatched the Australian all-rounder for consecutive boundaries.

All of the bowlers took punishment except for the tournament’s leading wicket-taker, Pravin Tambe, who ended with figures of 4-0-19-2.

The Royals' chase began with excitement as the late replacement for the injured Brad Hodge, Kusal Perera, hit Maxwell for two consecutive boundaries in the first over but then proceeded to run himself out.

Sanju Samson then joined Ajinkya Rahane at the crease and the pair added 109 runs off just 67 balls for the second wicket to set up a tense finish to the game.

Samson had the crowd in raptures as he smashed four boundaries and four sixes on his way to 60 off only 33 deliveries.

Rahane tried in vain to keep his side in the contest with 65 off 47 balls which included five fours and two sixes.

The biggest turning point in the contest came when Harbhajan Singh (4-32) grabbed three wickets in the 17th over.

The first ball saw Rahane send the ball down the throat of Smith at deep midwicket. Three balls later and the spinner clean bowled Stuart Binny (10) and then had Kevon Cooper (four) stumped by Karthik two balls later.

Nathan Coulter-Nile then cleaned up Rahul Dravid (one), who swung across the line before Kieron Pollard (3-31) grabbed his three wickets in the space of five balls as the Royals’ tail-enders tried to clear the boundary rope.

Pollard had Dishant Yagnik caught behind before Smith took two catches at deep mid-wicket to remove Rahul Shukla and Tambe without scoring to end the game.

It was a lame ending to the Royals’ innings after they were 117 for one in the 12th over.

We live in a world where facts and fiction get blurred
In times of uncertainty you need journalism you can trust. For only R75 per month, you have access to a world of in-depth analyses, investigative journalism, top opinions and a range of features. Journalism strengthens democracy. Invest in the future today.
Subscribe to News24
Related Links
Proteas start sweating it out
Smith sends Mumbai into final
Next on Sport24
Smith sends Mumbai into final