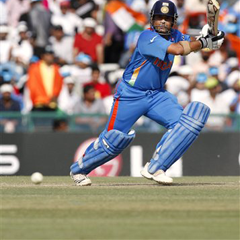 Sachin Tendulkar (Gallo)
Mumbai - Gautam Gambhir cruised to 77 to help India to 164 for three in the Cricket World Cup final against Sri Lanka at the Wankhede Stadium in Mumbai on Saturday.


Earlier India fans hoping Sachin Tendulkar would make his hundredth international century in the Cricket World Cup final against Sri Lanka on Saturday were stunned when he fell for just 18.

Tendulkar, on his Wankhede Stadium home ground, was caught behind by Sri Lanka captain Kumar Sangakkara off fast bowler Lasith Malinga to the despair of the bulk of the 33 000 capacity crowd.

His exit left India 31 for two in reply to Sri Lanka's 274 for six and meant the 37-year-old Tendulkar's dream of winning a first World Cup title, at the sixth attempt, was now in the hands of his team-mates.

Tendulkar, who has 51 Test hundreds and 48 in one-day internationals, produced two stylish boundaries, driving Nuwan Kulasekara down the ground and cutting him for another four.

But his brief, 14-ball innings ended when he tried to steer the slinsghot-style Malinga through the off-side only to get an edge safely held low down by diving wicketkeeper Sangakkara.

Tendulkar walked off to the kind of standing ovation usually reserved for batsmen who've scored far more than 18 in what was a recognition of his previous great deeds rather than this innings.

For India supporters, who'd earlier seen Sri Lanka's Mahela Jayawardene make 103 not, there were worrying signs of history repeating itself.

When India last played in a World Cup final, Tendulkar's only previous appearance in the showpiece match, they saw Australia pile up a mammoth 359 for two in Johannesburg in 2003, with Ricky Ponting making a brilliant 140 not out.

Faced with an even more daunting chase than the one confronting him on Saturday, Tendulkar was caught and bowled by paceman Glenn McGrath for just four in a match India lost by a colossal 125 runs.

This World Cup is widely expected to be Tendulkar's last as he will be 42 by the time of the 2015 edition in Australia and New Zealand.

We live in a world where facts and fiction get blurred
In times of uncertainty you need journalism you can trust. For only R75 per month, you have access to a world of in-depth analyses, investigative journalism, top opinions and a range of features. Journalism strengthens democracy. Invest in the future today.
Subscribe to News24
Related Links
India need 275 to win CWC
CWC 'trophy' confiscated
Toss controversy at CWC final
Next on Sport24
India need 275 to win CWC