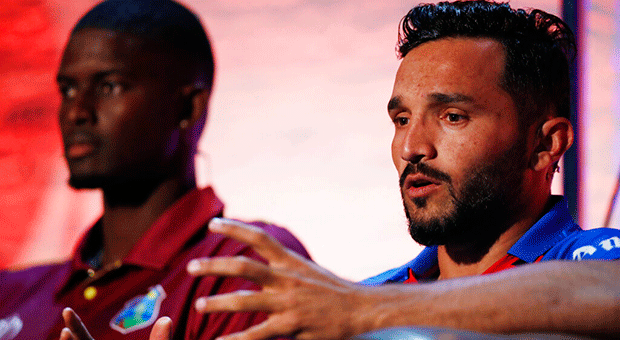 Cardiff - Afghanistan captain Gulbadin Naib has played down the weather threat ahead of their World Cup match against Sri Lanka on Tuesday, saying a rain-shortened game would suit his aggressive side.

Forecasts predict persistent rain in Cardiff, which could play havoc with Afghanistan's bid to get their first win in this year's tournament.

Naib's team were given a harsh lesson by holders Australia, who cruised to a seven-wicket win in the opening game for both teams in Bristol on Saturday.

But Naib believes his team have a better chance of success against Sri Lanka, whom they beat by 91 runs in last year's Asia Cup in the United Arab Emirates, if the contest is reduced from the scheduled 50 overs-per-side due to the weather.

Asked on Monday if he was worried about rain derailing Afghanistan's hopes, a relaxed Naib told reporters: "It was also predicted for today, but it didn't rain so much.

"Tomorrow we just see what's the weather. I think maybe the weather will be the same. So if we can reduce the overs it will be much better for us."

Despite the defeat against Australia, Naib says Afghanistan were encouraged by parts of their performance and he hopes to build on that in the Sri Lanka match.

"If you have wickets in hand, so maybe the score is 300-plus something."

Sri Lanka were dismissed for a paltry 136 by New Zealand in their first World Cup match in Cardiff and Naib plans to prey on those batting weaknesses.

"I saw the Sri Lankans play on TV. They lost a few games in the last two years and they're struggling in one-day matches," he said.

"Yeah, we have the opportunity to do well against them," added the skipper, whose team lost to Sri Lanka at the 2015 World Cup.

"But they are also a good team and we cannot it take easy. We can try to score big. If we play 50 overs maybe it will be difficult for them."

"Hassan was hit by the ball (in the last game) but he's feeling well," he said

We live in a world where facts and fiction get blurred
In times of uncertainty you need journalism you can trust. For only R75 per month, you have access to a world of in-depth analyses, investigative journalism, top opinions and a range of features. Journalism strengthens democracy. Invest in the future today.
Subscribe to News24
Related Links
Sri Lanka must toughen up against Afghanistan, says Malinga
Bayern's Mueller backs India's CWC challenge
Shakib Al Hasan on "extremely satisfying" Bangladesh win
Next on Sport24
Petition to have 2019 CWC shared rejected