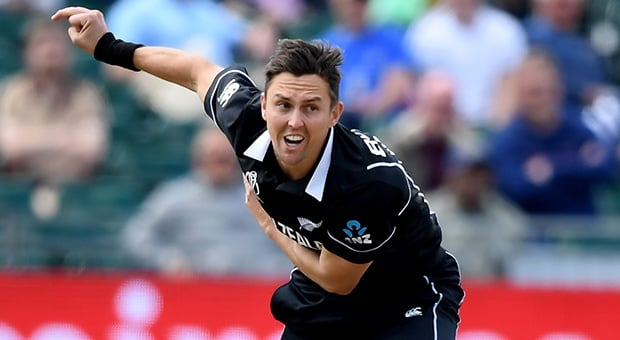 Birmingham - When thinking back to New Zealand's famous semi-final win over the Proteas at the 2015 World Cup, speedster Trent Boult clearly remembers sitting in the changeroom before Grant Elliot smashed Dale Steyn for six in the final over to send South Africa crashing out.

"I remember hoping like heck that I don't have to bat," he said at Edgbaston on Tuesday.

"When we saw the ball soar over the fence in the last couple of balls there, it was pretty ecstatic."

That was one of five World Cup losses the Proteas have endured against the Black Caps over the years, while they have only registered two wins and lost the last four.

On Wednesday in Birmingham, the Proteas simply have to find a way.

Anything but a victory will almost certainly mean that they do not qualify for the semi-finals of the 2019 World Cup.

It has been a nightmarish tournament for South Africa so far.

Defeats in their first three matches to England, Bangladesh and India were followed by a 'no result' against the West Indies, and they only recorded their first win of the competition against relative minnows Afghanistan on Saturday.

There is no room left for any error.

New Zealand, meanwhile, are sitting pretty with three wins and a 'no result' leaving them with seven log points.

They will enter Wednesday's clash as favourites, but Boult has played against South Africa enough times to know that they will always pose a dangerous threat.

"I think we've got to respect all of them, to be honest," he said.

"They've got some classy players at the top of the innings. They've obviously had an interesting start to their tournament, so they'll be hungry to come out and perform.

"They are led by an experienced captain as well, and they've got some dangerous hitters lower down in the order. So yeah, 100 percent we need to be on the mark with how we start. Obviously, that's my role to hopefully get some early wickets. I'm looking forward to getting into it."

New Zealand went on to lose to the 2015 final to Australia, but that semi-final win in Auckland remains one of the proudest moments in the country's cricketing history.

"There have always been exciting games between New Zealand and South Africa over the past World Cups," Boult added.

"The semi-final at Eden Park was one of the greatest games that the Kiwis have played. It obviously got a lot of attention back home, and it was a cool one to be a part of it.

"We're looking forward to facing them tomorrow, and I'm sure they're eager and hungry to put in a good performance because it's a big one for them too."

Pressure and the Proteas have not often worked well together at World Cups, and on Wednesday that pressure will be at a maximum.

"Obviously, it's a big game for them. It's a must win in their tournament," said Boult.

"Whether there's a lot of pressure on them, I'm not too sure.

"We have to expect they'll be eager to come out and perform. They're coming off a win, and they'll be excited to bring their game plan here, and it should be a good spectacle."

We live in a world where facts and fiction get blurred
In times of uncertainty you need journalism you can trust. For only R75 per month, you have access to a world of in-depth analyses, investigative journalism, top opinions and a range of features. Journalism strengthens democracy. Invest in the future today.
Subscribe to News24
Related Links
Proteas: Henderson hails Tahir as 'great example'
England's Roy targets Australia match for CWC return
Shakib on Windies win: At no point did we panic
Next on Sport24
Petition to have 2019 CWC shared rejected