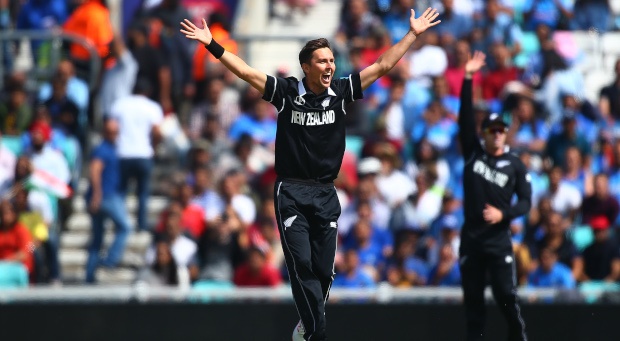 London - Trent Boult starred with the ball as New Zealand thrashed India in a World Cup warm-up match at the Oval on Saturday.

The left-arm seamer exploited overcast conditions and a pitch with plenty of grass cover to finish with four for 33 as India were skittled out for just 179 in 39.2 overs.

Ross Taylor (71) and New Zealand captain Kane Williamson (67) both spent useful time in the middle as the Black Caps won with almost 13 overs to spare.

Ravindra Jadeja (54) and Hardik Pandya (30) were the only India batsmen to make it past 19.

India captain Virat Kohli fell for 18 to medium-pacer Colin de Grandhomme when the star batsman was clean bowled by a ball that cut back in off the seam as he aimed towards midwicket.

Kohli's men were in danger of being dismissed for under a hundred when MS Dhoni, the captain of the India side that won the 2011 World Cup, fell to Southee to leave his team on 91 for seven.

India, however, were still bowled out with nearly 10 overs of their innings remaining, with James Neesham taking three for 26.

We live in a world where facts and fiction get blurred
In times of uncertainty you need journalism you can trust. For 14 free days, you can have access to a world of in-depth analyses, investigative journalism, top opinions and a range of features. Journalism strengthens democracy. Invest in the future today. Thereafter you will be billed R75 per month. You can cancel anytime and if you cancel within 14 days you won't be billed.
Subscribe to News24
Related Links
CWC dream Taylor-made for Black Caps great
New Zealand: Strong contenders for CWC 2019
India run-machine Kohli eyes CWC glory as captain
Next on Sport24
Petition to have 2019 CWC shared rejected